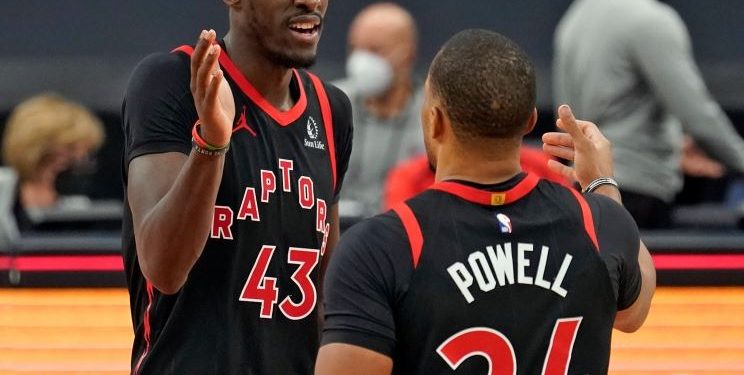 What do we have here?

After weeks of being underestimated, Toronto suddenly found themselves in the upper echelon of the Eastern Conference. This week had them face the best of the East along with a Minnesota trap game sandwiched in the mix. No one would have been surprised if Toronto ate losses but instead, they showed shades of the tenacity that made them champions.

The Raptors did it by committee, players up and down the roster contributed. They may not have an All Star this year, but just as the rising tide lifts all boats, their combined efforts have resulted in wins. And with Coach Nurse’s galaxy brain unlocking the potential of his players, the Raptors have become one of the most dangerous teams in the league.

Toronto received an unexpected but welcomed boost when OG made his return from injury. He immediately bolstered their defense while also forcing Coach Nurse to try yet another starting lineup. The Raps went small with Anunoby taking the place of Baynes. The small ball experiment looked good for long stretches. Toronto played composed, they hunted shots and stayed in control. Lowry left to injury opening the door for VanVleet to get his. 6 others scored in double digits to chip in. This was a complete team win.

Even without Lowry, the Raptors stayed with their small ball lineup, this time adding Bembry to the starters. Credit to Coach Nurse for the way he experiments like a mad scientist. He unlocked a competitive formula and made his ‘switchable defense’ a league wide problem. Powell cooked Milwaukee, no surprise; he is historically known to dine on venison. Milwaukee had no answer for VanVleet and Siakam, both played with enthusiastic determination. Toronto was tough on D and unrelenting on offense. They hand the Bucks their 5th straight loss. Somewhere Masai Ujiri is laughing maniacally.

After a rash of injuries, Coach Nurse finally added Boucher to the starters. The Raps were shorthanded, but they were itching for a chance to avenge one of their most disappointing losses of the year. Toronto played with confidence despite obvious fatigue. They led into the break off Powell’s firestorm of 3’s. Toronto picked up a pair of techs in the midst of a 23 – 1 Minnesota run and gave up the lead. But they clawed all the way back and stuck a dagger into the hearts of the Wolves with seconds left to steal a wild game.

The Raptors were home for their first of back-to-back games against the 76ers on Sunday night. The Sixers are the class of the East and a true test to see how far the Raptors have come. Philly also had the indomitable Embiid playing at an MVP level. Philly overpowered Toronto but the Raps used their quick defensive rotations to stay in it. Siakam and VanVleet held the fort until Boucher exploded off the bench for a massive scoring punch. Toronto locked in their defense to wrap up the win. 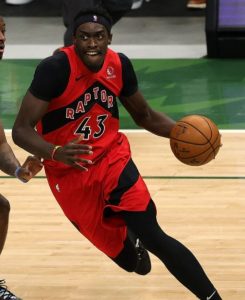 Because of such a rocky start, Siakam hasn’t found himself on the High 5 too often. He made his long-awaited return to the POW as he rounds into All-Star form. Siakam’s scoring is becoming more consistent while the rest of his game remains solid. He has provided exceptional defense, grabbed his share of rebounds and seems more engaged and comfortable with each passing game. Pascal can still raise the spice factor, but this was a nice elevation from Cayenne pepper to Siracha levels of heat. 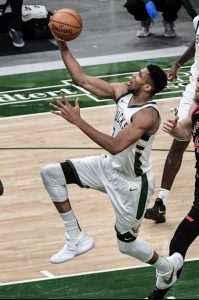 The two-time MVP proved why he is worth all his accolades when he delivered a stat stuffing effort against Toronto. He led the Bucks in scoring, rebounding, free throws, steals and tied for the team lead in assists. It’s amazing that even with all the changes Milwaukee did, they still depend so heavily on Giannis. To say he is vital to Milwaukee’s efforts is a severe understatement. 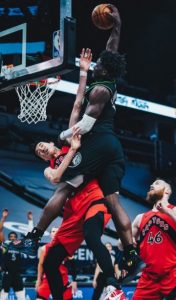 Shout outs to Minnesota’s Anthony Edwards who prematurely ended the career of Yuta Watanabe with the likely dunk of the year. That slam put Yuta on a poster and sent shockwaves throughout the hemisphere. 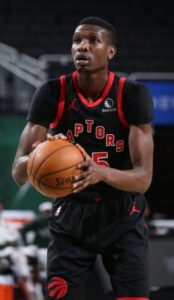 With the Raptors struggling to contain Embiid and sputtering through a scoring drought, they turned to their rail thin center to save them. Boucher was instant offense off the bench, he lobbed triples down on opponents who disrespected his range. He also held his own, despite being physically outmatched, and did some decent glasswork. His play ignited the Raptors to a big win. 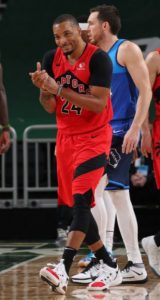 Norm earned his spot on the High 5 after a handful of games of incendiary shooting. Now that he has had a taste of starters life, he has not let his foot up off the gas. He single-handedly forced Toronto’s new small ball lineup. Norm has excellent elevation on his jumper, outstanding athleticism and is automatic from the corners. He has raised his stock and increased the value of his upcoming contract. This is Norm at his best.

On Tuesday, Toronto will again face Philly to conclude their 2-game mini-series. The very next night, they travel to Miami to take on the underperforming yet well coached Heat. The Houston Rockets will visit Tampa on Friday and finally, Toronto will welcome the Chicago Bulls to a Sunday night matchup.