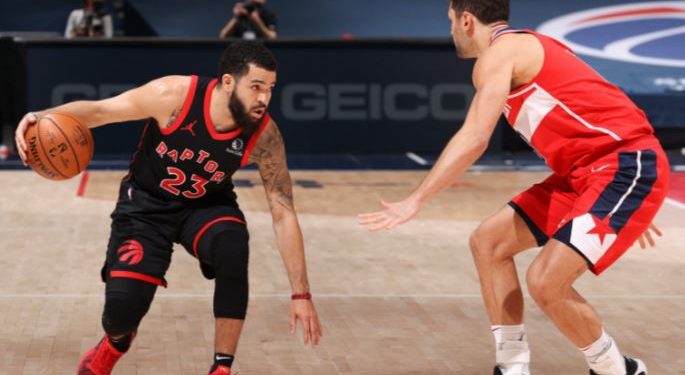 Toronto is back to playing good basketball again. There are still glaring holes in their game but, for the most part, the Raptors are competing night in and night out. In retrospect, the Raptors were spoiled with their championship team, this new wave of players still needs grooming before they can consider themselves contenders.

Toronto picked up a pair of wins but disappointingly, failed to put away a terrible Minnesota team. That loss stings especially heading into a difficult week.

Toronto and Memphis wrote another chapter in their Naismith rivalry on Monday. Toronto’s defence is building a reputation with the way they pack the paint and force turnovers. Memphis is no pushover; they took command when Lowry left due to back spasms. The Raps also lost Coach Nurse after he picked up a pair of techs, but they were galvanized and rallied to snatch control away from Memphis. They rode a wave of momentum and picked up a character-building win.

Washington boasts a talented backcourt in Beal and Westbrook but, so far, their union has not equated to success. The Raps were wary of Beal, he has mounted his share of Raptor hides in the past. The Wizards picked up Alex Len off the waiver wire to boast their frontcourt, but it made no difference, their defense was atrocious. The Raptors did what they wanted whenever they wanted. Toronto shot nearly 60% from deep, that’s a tough mountain for any team to overcome. Siakam, Lowry and Powell had a field day picking Washington apart.

Toronto’s game plan was simple; stop Tatum and Brown. To their credit, Toronto kept both players well below their scoring averages, but unfortunately, they adjusted and moved the ball with ease to find unlikely shooters who did considerable damage. Toronto was playing on back-to-back nights, their legs were heavy and it showed. They got good production out of Siakam and Lowry but ran out of gas.

It was a low energy affair when the Raptors and Timberwolves met on Sunday night. There wasn’t many highlights, just players going through the motions. It seemed that the game was there for the taking, all it needed was someone to step up. The Wolves slightly raised their effort to build a double digit lead in the second half. The Raptors showed a bit of heart in, literally, the final minute. Somehow, they even had a chance to push it to overtime, but Siakam’s attempt was left on the rim. Toronto loses in an embarrassing effort. 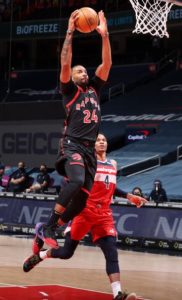 Powell is in the midst of the best stretch of basketball of his career. Although he has flirted with excellence before, this is the longest that he’s been able to sustain it. Powell is a serviceable defender and will provide a handful of intangibles but now he has evolved into a professional scorer. He knows his hot spots and has learned how to maximize his impact while on the floor. 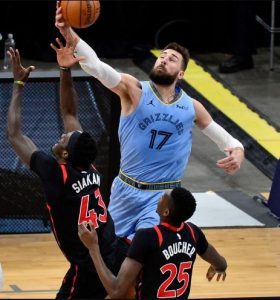 JV will always have a place in the hearts of the Raptors faithful for his 7 years in the 6. He spent the entire game reminding Toronto what it was like to have a reliable center when he went full Kaiju mode on Toronto’s mediocre front court. Jonas was big beef on the backboard, 10 of his 20 rebounds were on the offensive end. Baynes will see JV in his nightmares. 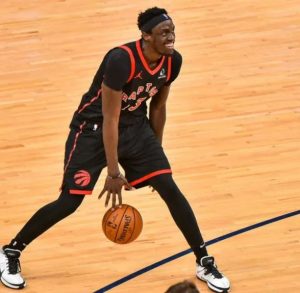 Siakam went off on the Grizzlies hitting 5 triples on his way to one of his better games of the year. Points came easy for Siakam, he scored efficiently, threw in a bunch of stats and played with a smile all game long. Pascal entered Monday’s action only shooting 23% from deep, he had been struggling to find his shot, turns out it was in Memphis this whole time. 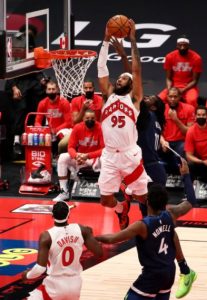 While the Raptors shuffled their line ups due to injury, Bembry was out sniffing for opportunities. He had spurts of dynamic offense, but he earned his minutes off his D. There was no better example of this than in the Memphis game when he ripped the ball out of Valanciunas’ hands as he held it meters above his head and took it back for an easy bucket. Bembry gets it, he is carving his way into Nick Nurse’s rotation.

Toronto heads into a tough week with 3 of their next 4 games coming against elite competition. They face Giannis and the Bucks in back-to-back games (both in Milwaukee) on Tuesday and Thursday. Toronto will then immediately travel to Minnesota for a rematch against the Timberwolves on Friday before finally finishing their week by hosting the East leading 76ers on Sunday.