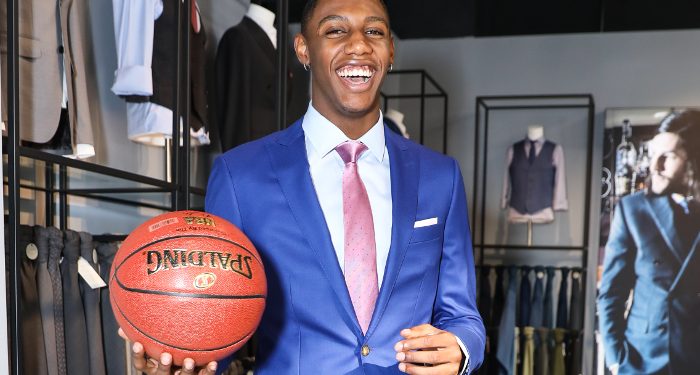 June 20, 2019 (Vancouver, BC) — INDOCHINO, the global leader in custom apparel, has announced an exclusive multi-year alliance with basketball star and top NBA draft prospect RJ Barrett. As INDOCHINO’s first Signature NBA Athlete, Barrett will be running a series of campaigns, including an exclusive RJ Barrett collection of luxury custom apparel and customizations handpicked by the player to coincide with his 2019-2020 NBA season debut.

Barrett, who grew up in Toronto and is a member of the Canadian national basketball team, will be wearing the Canadian brand’s clothing into the stadium during home games and to a series of high profile events throughout the year. His first appearance in INDOCHINO will be at the NBA draft in New York on June 20, where he is expected to be a top 3 pick.

“I’m excited for Thursday’s draft — I’ve been working towards this my entire life and am ready to take the next step,” said RJ Barrett. “I’ve never been afraid to make the big play and I’m going to be a warrior in INDOCHINO on draft day and beyond.”

“RJ has an opportunity to become a generation defining NBA star. Not only is he a natural leader, he has the discipline, confidence and determination to succeed on and off the court,” said Drew Green, President and CEO of INDOCHINO. “These qualities make Maple Mamba the ideal ambassador for INDOCHINO, and we are proud to align ourselves with the athlete and person RJ has become. He will inspire a new generation of fans to follow their dreams, just as INDOCHINO is inspiring a generation of customers to create their own style.”

INDOCHINO lets customers design their own suits, shirts, blazers, chinos and overcoats. RJ Barrett fans will be able to customize his looks to their own personal tastes including lapel style, buttons, pockets and cuffs. Suits start at $399 USD / $539 CAD and shirts at $79 USD / $109 CAD, and are available online or in one of 46 showrooms across North America.

As the global leader in made to measure apparel, INDOCHINO has developed the shopping experience of the future. Born out of the belief that you don’t need to spend a fortune on a custom wardrobe, INDOCHINO was the first company to disrupt the retail sector by making perfect fitting, personalized apparel on a mass scale.

Customers take on the role of designer, picking out every detail of their suits and shirts to make them truly one-of-a-kind. These garments are made to their precise measurements and are shipped directly to their door, hassle free. The company’s omnichannel approach allows them to shop online or in person at any INDOCHINO showroom.

Rowan Alexander “R. J.” Barrett Jr. is a Canadian basketball player. He played college basketball for the Duke Blue Devils and is a member of the Canadian national team.

Born in Toronto as the son of former basketball player Rowan Barrett, Barrett shone at St. Marcellinus Secondary School in Mississauga, Ontario before transferring to Montverde Academy in Montverde, Florida. He was a five-star recruit and the consensus top recruit in the 2018 class, earning Naismith Prep Player of the Year and Gatorade National Player of the Year accolades in his final high school season. He was ranked the top player in his class by all recruiting services and was the first player since LeBron James to sweep all major awards in high school and win the national championship. Barrett is expected to be a top 3 pick in the 2019 NBA draft.

With the Canadian national under-19 team, Barrett was named MVP at the 2017 FIBA Under-19 Basketball World Cup after leading his team to a gold medal. He debuted for the senior team during qualification for the 2019 FIBA World Cup.

Basketball Prospects Travel to Toronto From All ...