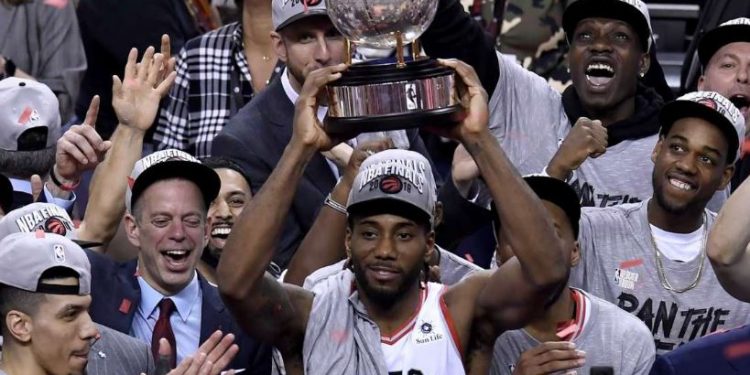 After battling through hostile territory to steal Game 5 and take a 3-2 series lead, Toronto had a chance to do what they had never done before; earn a trip to the NBA finals. The Raptors stood at the edge of greatness and opportunity was knocking at their door. Jurassic Park overflowed with intensity as the people of Toronto took over the streets in support of their team. The city buzzed with anticipation, fans all over Canada were ready to bear witness to the dawn of greatness. The Bucks may have been reeling after they dropped a crucial game at home, but like a fighter on his last legs, they came out swinging with nothing to lose. Milwaukee started the game with frantic urgency that Toronto struggled to manage. Their gunners showed up and connected from the corners while the Raptors had difficulty finding their shooting pockets. The Bucks outhustled Toronto on the glass and beat them to loose balls. It wasn’t until midway through the second that Toronto’s energizer, Kyle Lowry, was able to elevate the intensity of his teammates for their first real counterpunch. The Bucks kept the Raptors at arm’s length for most of the game by beating them to every 50/50 ball and taking advantage of a favorable whistle. But the Raptors stayed composed and, down 15, managed to go off for an incredible 26-3 run to rip the game away from Milwaukee. Down the stretch, Toronto executed where the Bucks could not, they drained key shots and grabbed essential rebounds. Coach Nurse made the right moves and, in the end, his team toppled the mighty Milwaukee Bucks to win the Eastern Conference championship and a birth to the NBA finals. This was another incredible win in an already historic playoff run; one that will have a ripple effect on generations to come. 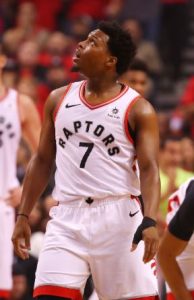 Kyle Lowry, the most underrated guard in the NBA, wanted this win so bad he could taste it. He was one of the only Raptors to start the game with the necessary energy needed to close out a desperate team. He left it all on the floor with relentless aggression, driving the ball with purpose and sticking his jumper with confidence. Lowry found his teammates with astute passing and he managed the offense like a grizzled general. KLOE was magnificent, scoring 17 points (including 3 triples), 5 rebounds, 8 assists and a steal. No one is more deserving for an opportunity to play for a championship than Kyle. He has given his blood, sweat and tears for this franchise but he would be the first to tell you that there is a lot more work to be done and the journey isn’t over yet. 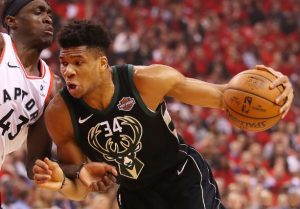 Giannis had some strong words after the Bucks dropped Game 5 and he backed it up with a fantastic night. The Greek Freak gave every ounce of effort he had throughout this contest. He broke free for a couple of easy transition buckets and he knocked down a few unexpected 3’s when the Raptors dared him to shoot. Giannis stretched his abilities as far as they could go, playing a heavy 41 minutes, but his lack of a jumper left him short on options when Toronto took away the paint. Antetokounmpo stuffed the stat sheet with 21 points, 11 rebounds, 4 assists, 2 steals and 3 blocks. They say you have to take your losses to learn how to win, Giannis will take these growing pains and come back stronger. 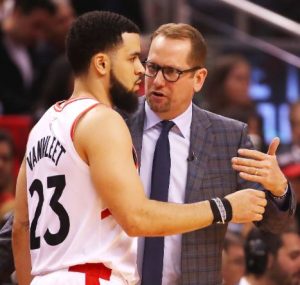 Fred VanVleet spent the first few weeks of the playoffs on the side of a milk carton but over the last two games, he has suddenly become Toronto’s most accurate three-point shooter. It is like he stole Danny Greens ability to shoot and is now twice as effective. Fred played with a boulder sized chip on his shoulder and brought his reliable instincts to impact the game. He hit a number of dead eyed jumpers including a deep one over Lopez in the fourth proving to everyone that he has ice flowing through his veins. VanVleet had 14 points (4 for 5 from deep) and 2 assists in 34 minutes. Fred’s recent hot play has been a godsend and will be needed to keep pace against the splash bros. 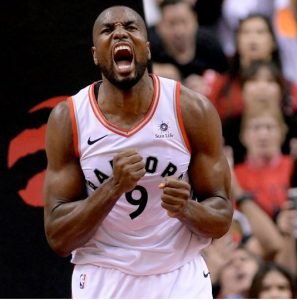 Serge Ibaka has been a consummate professional all year, doing whatever Coach Nurse asked of him. He has shown excellent maturity, never losing his motivation or intensity despite having to adjust his role from game to game. He only had 9 points and 3 rebounds but when Coach Nurse needed someone to bring energy, Ibaka answered the call like a man on fire. He was a key piece in Toronto’s game swinging run and he punctuated it with a couple of earth-shattering dunks that sent the crowd into hysterics. Serge was the perfect hype man to Toronto’s collection of stone-faced assassins. 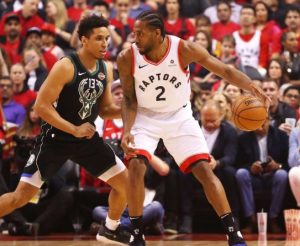 Kawhi Leonard was off for about 2 ½ quarters. His shot was short, he was missing routine looks and he turned the ball over at the most inopportune times. But with the Raptors in a deep hole as the third quarter started to wind down, Kawhi Leonard said enough’s enough. From there he took over the game like his name was Jordan. He methodically dissected the Bucks on D, he held them off the glass with expert box outs and he forced some difficult shots with his on-ball attention. Leonard galvanized the Raptors throughout the second half and improved as the game went along. He dropped a one-handed anvil on Giannis, breaking the league’s MVP spirit and crushing his soul in the process. It was a dunk so fierce that it sent shockwaves from coast to coast, flooding social media with reaction videos. Kawhi knew that Toronto’s weakness against the Bucks was on the glass so he responded by grabbing an astronomical 17 rebounds (4 offensive). He also led his team with 27 points, 7 assists, 2 steals and 2 blocks. With this win, Leonard has ascended to legendary status and solidified himself as the best basketball player on planet earth.

The Toronto Raptors will now welcome the NBA Champion Golden State Warriors for Game 1 of the NBA final on Thursday night.