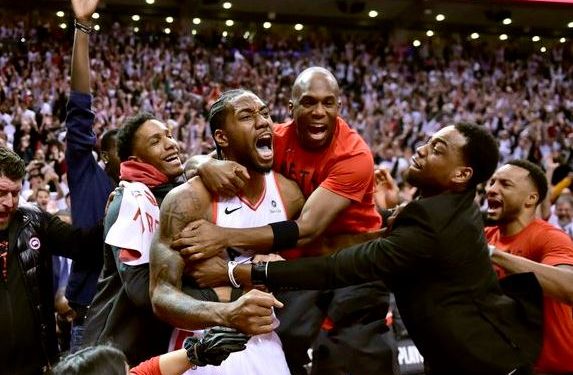 The Toronto Raptors hosted the Philadelphia 76ers in what could easily be considered the most important game in franchise history on Sunday night. This series has been unpredictable, two blowout wins for both teams and two nail biters that were decided in the final minute. The 76ers were trying to realize their potential while the Raptors were on the verge of becoming a team of destiny, if only they could exercise their playoff demons. The Scotiabank Arena was a sitting powder keg begging to be lit, but Toronto’s offense sputtered, keeping the Raptors faithful anxious and uneasy. Both sides were unwilling to give an inch, points were infrequent and defensive effort was at an all time high. The first half was a back and forth slugfest, more reminiscent of a heavyweight boxing match than a basketball game. Aside from a flash Reddick 3 and a leak out Kawhi slam, there were no easy looks unless it was coming from the foul line. The Sixers were able to break out a deflating 16-0 run in the third quarter to push their way past the Raptors who struggled to ignite their offense. Toronto was finally able to respond off a surprisingly strong performance from Serge Ibaka. Both teams traded knock out blows on every trip; the hopes and dreams of the fans lived and died in the seconds that the ball hung in the air. This was perfectly captured when in the final moments of the game, Kawhi Leonard made one of the greatest shots in team history. With 4 seconds left to play, Kawhi dribbled to the corner, rose up and shot a contested jumper over a lunging Joel Embiid. The ball arced high, suspended in the air for what felt like a lifetime, until it bounced off every part of the rim before dropping, winning the game and series for Toronto. The Scotiabank Arena exploded into utter pandemonium. The emotions spilled over as the energy of the fans reached a crescendo in a thunderclap of euphoria. Kawhi Leonard cried out in victory as his teammates mobbed him in a sea of red. This was a series for the ages, basketball at its finest level and one of the greatest games ever played in Raptors history.

This was a legacy defining game for Kyle Lowry. As the leader and longest tenured Raptor; Kyle had a lot of pressure heading into tonight’s contest. He suffered a left thumb injury in the second quarter and had to make an early trip to the trainer’s room to get re-taped. Once he re-entered the game, Kyle elevated his intensity to will his team to a narrow lead going into the half. In the third and fourth, it was much of the same, as Kyle played with insatiable energy and uncompromising effort. Lowry scored 10 points to go with 6 rebounds, and a game high 6 assists. Kyle also had 2 steals, one of which came with just over a minute to go, leading to a fast break which helped put Toronto in a position to win the game. This was a fantastic performance from Toronto’s most deserving player. Kyle Lowry Over Everything. 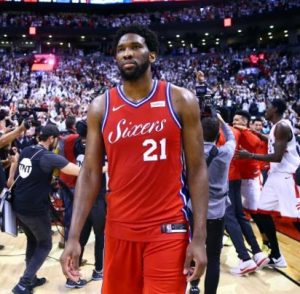 Despite not always leading his team on the scoreboard, Joel Embiid has been Philadelphia’s most important player. His presence takes up so much space on the court and he is such an imposing figure that players must always be mindful of him. No stranger to physicality (although going down quite easily at times), Joel once again threw his weight around to create separation and open space for his slashers. He did his part on the glass, pulling down a team high 11 rebounds to go with 21 points. Joel also added 4 assists and 3 blocks to round out his night. Embiid left it all on the floor in a heavy 45 minutes but in the end, the 76ers most charismatic, enigmatic, and talented player was reduced to tears as he walked listlessly away in defeat.

Serge Ibaka chose a great game to find his range from distance as one of the only Raptors willing to shoot it with confidence. He has been physically overmatched when pitted against the hulking Embiid, but he never backed down from the challenge. When the game slowed, Ibaka was excellent at recognizing matchups to see exactly where Philly was vulnerable. Ibaka was ‘Johnny on the Spot’ for a couple of momentum swinging put back baskets late in the game. He scored 17 points (including 3/5 from deep) to go with 8 rebounds and 3 assists. Serge played with laser like focus and energy resulting in his best game of the series. The Raptors needed someone to step up and Ibaka answered the call. 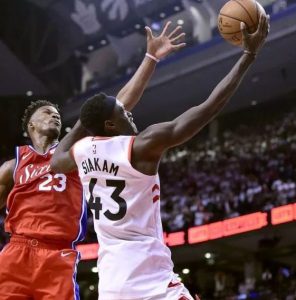 Pascal had a quiet game, only moderately spicy, but his effort was integral to tonight’s victory. He had a double-double with 11 points and 11 rebounds, to go with 2 assists and 2 steals. The 76ers did a good job stifling Siakam’s transition attack for most of the game, but Pascal was able to break free with just over a minute to play for a crucial momentum building layup off a Lowry steal. Siakam’s energy was essential, especially in the first quarter, to help keep Toronto stay competitive. Siakam may not have filled the stat sheet but his defensive effort was immeasurable and his work in the rebounding department kept several plays alive. 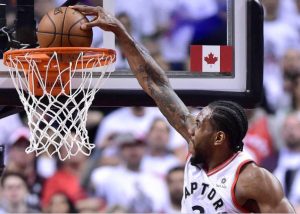 Like most of the Raptors, Kawhi Leonard had a slow start, coming up short on many of his looks. But as the best player in the series, Kawhi’s gravitational pull was inescapable. He ferried two defenders anytime he touched the ball, they shadowed his every step like a pair of bodyguards. He had one of the only first half highlights when he ripped the ball away from a dumbfounded Embiid in the open floor leading to a breakaway two hander. He also had a gorgeous up and under lefthanded finish (with a touch of English) at the end of the first half. After shooting at a blistering clip to start the series, Kawhi’s efficiency dropped considerably which hurt Toronto’s momentum. However, the Klaw more than made up for it by coming up with the most important shot at the most crucial time. He scored a game high 41 points (on an astounding 16/39 shooting), with 8 rebounds, 3 assists and 3 steals. With his game winning shot, Kawhi has solidified his name in Raptors history and now sits among the pantheon of Toronto greats. The Raptors most valiant soldier delivered when it mattered most, leading his team to an unforgettable series victory.

The Raptors will not have much time to enjoy this victory before they will be back to work in preparation for the resting Milwaukee Bucks. The Raptors are in for another war. Round 3 kicks off in Milwaukee on Wednesday night.