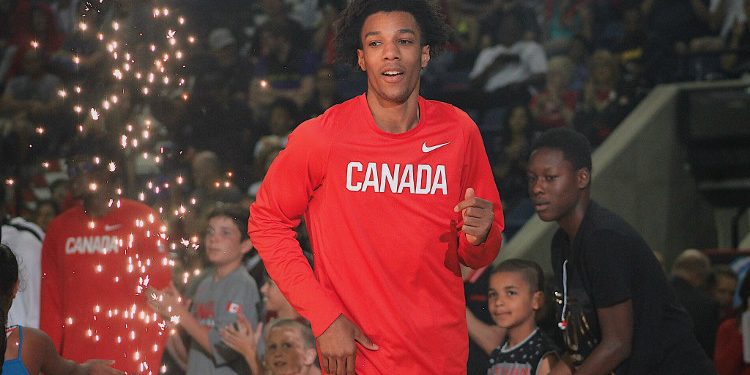 AJ Lawson has come off of his final visit at Tulane University. He visited South Carolina, Creighton and Tulane and is getting ready to make his college decision before the end of June.

The schools cut from the list were Oregon and SMU.

Lawson has officially reclassified from the 2019 class and will be entering college for the 2018-2019 school year.

After a strong performance with the National team at FIBA U18 Americas, more schools reached to get in the mix with Lawson. By that time, the relationships with coaches who had been recruiting him were too strong and Lawson remained loyal to them.

Lawson finished the tournament averaging 14.8 points, 5.4 rebounds and 1.2 assists while shooting 52% from 2 point range and 44% from the three.

Loyalty and a strong relationship with the coaching staff is a primary component in choosing a program for the 6’6 Canadian scoring guard.

“I would want to have full on trust in the coaching staff and them in me. I need to figure out where I have the best chance of maximizing and improving my game and who can help me do that best. I’m blessed to have the options that I have and the coaches who I’ve been talking to.”

With all the limelight he’s been getting as of late, one can see a maturing young man who is breaking out of his shell and taking matters into his own hands. There is sheer confidence that is making its way to the forefront.

Lawson continued, “I think picking the right style of play would be another major priority that I want in a school because I need to play in a system where I can be me and do what I’m capable of doing, which is playing fast. Also, a place where I could call home and be comfortable with my teammates.”

Based off of style of play and Lawson’s downhill speed it seems like Creighton and Tulane take the lead in that regard.

Creighton leads all teams recruiting him in transition points per game with 22; good for 4th in the country in comparison to Tulane at 183rd and South Carolina at 265th.

Creighton does not give the defense a chance to set up, meaning they can exploit transition opportunities. This is a part of the Bluejays DNA.

Coach Mike Dunleavy at Tulane has brought on NBA style offense to the Green Waves. In theory, the team is trying to get a shot off within the first 10 seconds of the shot clock.

With the lofty NBA goals that Lawson has of being an All-Star one day, no one is proven to have more NBA experience at the NCAA level than Coach Dunleavy.

Yet another aspect that Lawson has brought up in conversation is improving on his defensive potential. This was an area that all of the head coaches that are recruiting him loved about him at FIBA Americas.

The top suitor for defensive improvement would be South Carolina as Frank Martin’s teams always come ready on that side of the ball. Coach Martin is a specialist in that regard.

A toughness element is also something that would be greatly developed at South Carolina.

Lastly, with SC, the SEC is a conference that is enticing to Lawson.

“Right now I think the best way for me to make the best decision is to make a chart of the schools I am considering and write out all pros and cons of the school and to ask questions to coaches. There’s still some things that I’m unsure of that I would like to be clear on.”

Lawson will be meeting with his family and inner circle on Monday to map things out and eventually make a decision between Creighton, South Carolina and Tulane.