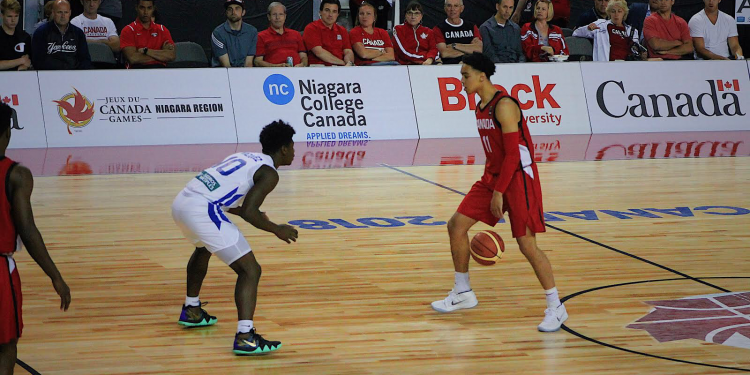 The Senior men’s national team will begin their quest to qualify for the FIBA 2019 World Cup this month, as the players invited to training camp were announced earlier today.

It will be a quick turnaround for Nembhard, who spent all of last week representing Canada in the U-18 America’s in St. Catherines, where Canada earned a silver medal.

Nembhard started at point for every game in the FIBA America’s this past week. (Photo: NPH)

This will be Barret’s second time invited to the senior men’s national training camp, but it is likely he will not just be looking to soak up the experience, but rather trying to make the big roster.

Should Barrett succeed, he will be the youngest player to make a senior roster since an 18 year old Jamal Murray had done it back in 2015, for the Pan-Am team that captured silver in Toronto.

Current NBA players that have been invited include Khem Birch of the Orlando Magic, Chris Boucher of the Golden State Warriors, Dillon Brooks of the Memphis Grizzlies, Dwight Powell of the Dallas Mavericks, Kelly Olynyk of the Miami Heat, and national team stalwart Cory Joseph of the Indiana Pacers.

This will be Joseph’s 10th FIBA tournament (senior and junior combined) representing Canada, the most of any player invited to this camp.

A number of pro players with NBA and national team experience have also been invited; most notably Andrew Nicholson and former number one overall pick, Anthony Bennett.

Despite Bennett’s struggles in his professional career, he has always shown to be a consistent piece for Canada, averaging 9.8 points and 6.2 rebounds a game, over five tournaments, in his senior men’s national career. Whether he will make this roster may still be up for debate due to the number of NBA level frontcourt players that have been invited, but do not be surprised if you see the Brampton native make the final cut.

Meanwhile, Nicholson will bring a plethora of experience to this Canadian frontcourt, having been both a leading scorer at times, and a veteran role player. The Mississauga native has averaged 11.9 points and 5.4 rebounds over six different senior level tournaments for Canada, including an impressive 18 and 8 during the 2015 Pan Am Games.

Four former U-Sports players will also be making the trip to camp this year, including Phil Scrubb, Thomas Scrubb, and Kaza Kajami-Keane from Carlton, and Aaron Best from Ryerson.

Best and Keane are also currently on the Raptors 905 roster, while the Scrubb brothers are currently enjoying professional stints in Europe.

The coaching staff will be headed up by current Charlotte Hornets assistant coach Jay Triano, while Roy Rana, Dave Smart, Scott Morrison and Nathaniel Mitchell will serve as assistants.

Triano needs no introduction, having been the head coach for Canada for almost every major FIBA competition for the past decade.

Smart is a legend in the U-Sports world, with 12 national titles with the Carlton Ravens in just 18 years with the program, while Rana is most notable for leading Canada to their first ever junior world championship ever, just last year as head coach of the U-19 team.

Morrison is currently working as an assistant coach for the Boston Celtics, as part of NBA guru Brad Stevens’ coaching staff. Morrison was also the 2015 G-League Coach of the Year while he was with the Maine Red Claws.

Nathaniel Mitchell has been a part of the Raptors 905 coaching staff since 2015, and has been a major factor as to why the 905 have become such a force in the G-League the past few seasons.

With this level of talent both on the floor and in the coaching chairs for Canada this summer, expectations should be high for this team to make it to not only the 2019 World Cup, but to eventually compete for a 2020 Olympic berth in Tokyo.

Training Camp will begin on June 20th, while their first official qualification game will be on June 29th against the Dominican Republic, at the Ricoh Coliseum in Toronto.