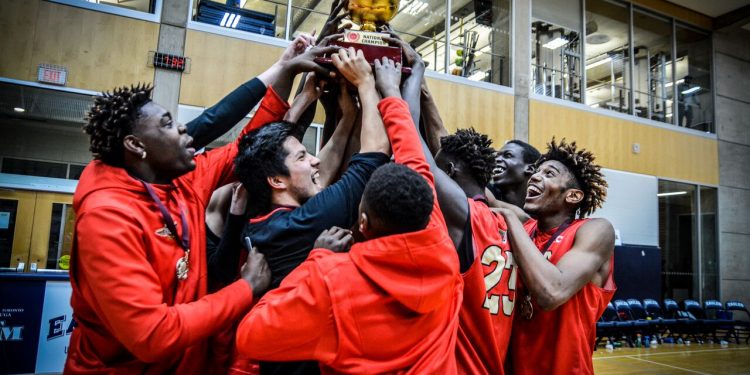 The second season of Canada’s National Preparatory Association is truly represented from coast to coast–British Columbia, Saskatchewan, Ontario, Quebec, Nova Scotia, New Brunswick…the nation has embraced a league it can call it’s own.

Entering its second season, the NPA defending national champs, Canada Topflight Academy, out of the nation’s capital, are coming in at the number one spot in the National Preparatory Association Team Rankings. The league crowned its first champion last season when CTA took down London Basketball Academy in the finals.

CTA return the core and have their sophomore 2021 rising star Muon Reath stepping it up for CTA. There aren’t many teams with this many returners in the entire league.

League action has started regionally, yet we will see the entire country come together to compete November 22-26 in Ottawa, Ontario at Notre Dame High School. Several NCAA, CIS and JUCO coaches have already confirmed attendance.

As mentioned above, the majority is back and ready for the league, as CTA’s homecoming is set for November 17 against Toronto Basketball Academy. They realize that there’s a target on their back and are ready to defend the National title.

The entire squad is being recruited at various levels. Starting combo guard Lual Akot has an NCAA offer from Old Dominion and interest compiling from mid-major programs. The seniors Khaleem Sarazin, Alston Harris, David Muila, and Rick Houle and newcomers Amata Ba, Atik Gilao, Jevon Wescarth will all bring something different to the team, while providing a great deal of size. The young pups begin with Muon Reath, who is going to see a surge in the attention around him as he’s a well sought out 2021 prospect. Enoch Kalambay and Ankit Choudhary will also be factors. Floor general Aiden Warnholtz will pan the point and ensure balance on the floor.

What makes this team so interesting is not only the chemistry, but also the depth and weapons at different positions. CTA is a squad that’s well rounded and has multiple pieces that can go off for 20 plus points at any given night.

Last year, Central Tech had the best overall record in the league. This season, Coach Jeffers has added size, shooters, with a 2018 returning PG looking to make a statement.

Raheim Sullivan helps decide the speed of the game and set the tone. It’s clear that he is one of the fastest guard in the league going coast to coast.

They have personnel to play in an uptempo style and try to rush other teams into mistakes, while also matching up in the half court.

The addition of 6’5 Matthew Daves, 6’7 Rashaan Chambers and 6’7 Craig Stranways bolsters their ability in the paint on both ends of the floor—Tech has added much needed size, to combine with their dynamic guards.

Returning forward, 6’6 forward Deiondre Reid will provide the Blue with energy, that the team will feed off all season.

Cordell Veira was the leader in every sense last season. He has now graduated and become the first prospect to go from Toronto Basketball Academy straight to the NCAA.

With Veira moving on to Florida International University, there’s a new man at the point, Marcus Masters.

He is well capable of producing through scoring, distributing and being a leader. The floor general will be surrounded by wings and guards that are all capable of having big nights of their own.

Calgary, Alberta product Diew Moses is one of those wings who will be making a real splash on the prep scene, along with notables like Tarig Eisa, Patrick Emilien and Amir Gholidzadeh.

My preseason selection to win it all.

Notre Dame out of Wilcox, Saskatchewan has a bunch of key returners and top producers that have put on for Western Canada. Jashon Henry and Adefolarin Adetogun are at the forefront of a Hounds team that is well rounded and shaping up to be a legitimate Championship contender this year.

Notre Dame comes in with what looks to be one of the deepest teams in the league. They could not say the same last year.

The addition of 6’8 Cole Newkirk at the power forward and center position brings strength, athleticism and dynamic scoring. 6’9 Carter Kuchinka and others also bring tools that can help the Hounds make a serious push. Landon Dickie and Wyatt Haux are going to play significant minutes as they are interchangeable with the work horse known as Greg Wint.

First off, AJ Lawson is simply on another level this year. There has been a mental trigger that has been pushed and taken this NPA star to new heights. Buzzer beaters and big plays are a part of what he does, yet this year he is learning how to lead.

Joshua Haughton, Kaosi Ezeagu & Tristan Lindo are major additions that give added fire power in transition and in the paint during half court sets.

Once this team gets clicking, they are another squad that can have a complete turn around from what they were last season.

There is a lot of talent on this team, it’s just a matter of if they can coexist and come together for one cause.

Meet British Columbia Christian Prep @PacPrepBasketba they want it ALL. Feature talent from all over the 🌎 #ANationInspired #2NDSZN #NPA pic.twitter.com/SkAX5DfCUT

Physically, this is the biggest team in the National Preparatory Association. Once again, BC features a culturally diverse roster from all over the globe.

Bahamian power forward 6’9 Sammy Hunter is coming off of a strong summer of development and will be a load to handle this season as he combines skill and experience.

With the team’s leading scorer from the inaugural season, Keenan Dowell graduated, Hunter and Marijan Obad will be key contributors offensively.

There is a lot of size and length on this squad which could pose match up issues for opponents and be advantageous on the defensive end in taking away angles. In year one, this program showed progress throughout the season as teammate got acquainted—with key returners and familiarity with the NPA, you could expect this squad to pack a punch from the jump.

Crestwood Prep is one of the National Preparatory Association’s expansion teams out of Toronto.

With a top 10 prospect from the 2019 Canadian class in Jahcobi Neath, he can really get things going offensively for Crestwood, both as a scorer and table setter.

Franco Miller on his wing brings just as much potency and toughness. Physically ready for the next level, his strength will be a challenge for other guards to contest.

There’s lots to still learn about Crestwood, but they do have a roster that could make some noise. We fully expect them to make an immediate splash, with a good chance to rise in the rankings.

2023 Canadian phenom, Elijah Fisher is a name to keep tabs on. The next best thing out of Canada.

Although London Basketball Academy was a finalist this year, this team can not take the number two spot. LBA is a much younger team than last year, with less experience on the big stage and against the competition level in the NPA. LBA’s biggest loss to graduation was Jalen Warren, who brought playmaking ability and contagious passion to the floor. That being said, there will be a period of adjustment and some trial and error that LBA will go through.

2020 Okay Djamgouz will be looked at to produce offensively. He opened up his first prep game registering 30 points while he shot 6-8 from three point land.

Josh Inkumsah and Denzel Cummins bring in the experience from the championship run they made last year. However, with new pieces to work with, the first half of the season will be about identity building.

Akim Olak comes in as a defensive stopper and provides athleticism at guard position, while senior 6’8 Kur Jockuch and 2020 6’7 Michael Matas provide much needed to size to battle at a high level in the NPA. 2018 6’10 Jonty Vinky will be an addition to LBA following the Ottawa session, landing in Canada, all the way from Australia.

Kellen Tynes and Shyheim Malcolm put on a show in the season opener in Nova Scotia against Halifax Prep.

Tynes opened up with 28 points,7 rebounds and 5 assists and Malcolm with a game high 39 points, 6 assists and 5 rebounds.

They will be relied on big time and have the support of Caleb Sooley and Lyon McLean to knock down jimmies.

This season Rothesay has recruited some size that will help them on the glass, an area that they struggled in last year, allowing second chance opportunities.

Rothesay has an opportunity to really turn things around this season as Coach Damian Gay continues building on a culture of toughness and accountabiltiy.

Montreal’s expansion team is one that we’ve been familiar with for years, as the program has long been a reputable name with an outstanding coaching staff and administration that has built a tremendous basketball culture in Montreal, Quebec.

Their home environment is one that opposing teams will want to avoid at all costs. They get loud and rowdy in a good way.

Ben Datro will be lighting it up from the three point line and creating poster plays while showing his elite athleticism and leading from the point.

The St-Laurent Express can also depend on Tre-Vaughn Minott in the post to protect home and get his own from around the basket.

As for the rest of the roster, they are young and yet to be evaluated. Time will tell what the Express will bring in year one of the NPA.

SJK’s trio of Branko Damjanovic, Milan Roknic and Aleks Novicic stood out in their season opener where they almost stole a game on the road against London Basketball Academy.

This team does not have a whole lot of depth but they do have strong coaching from Ahmad El-Osta who will have this team as prepared as possible for the competition that lies ahead.

SJK is a new member to the league who is looking to turn the page onto the prep scene and continue their tradition of high level basketball.

Another newcomer to the league, from Halifax, Nova Scotia adds to the Nation-wide infrastructure.

Although the province of Nova Scotia has under 1,000,000 in population, there is an entrenched basketball culture that has produced many high level talents. Most recently, Lindell Wigginton has arrived at Iowa State and set to do some damage as a freshman.

The point is Nova Scotia has more coming and this team will spark the interest for prep basketball in the province.

Brandon Muntu, by way of Calgary has travelled East to be a part of the team and will be a big time contributor to this squad, as he previewed for us in Hali Prep’s home opener, where Muntu registered 27 points, 6 assists, and 8 rebounds.

Ryan Toney, Julius Macgee and Cairo Berry are home grown talents that will need to contribute in order for Halifax to remain competitive in year one.

B. E. A. S. T Prep is a complete unknown with a lot to prove as a program. Matthew Green, younger brother of Martin Dixon-Green takes the role of PG.

Tyrese Virgo is someone that we’re familiar with who we feel can be a contributor on this squad along with 2019 forward Jervon Davis who stands at 6’7.

We’ve heard good things about 2018 6’7 Anthony Bradshaw, however have yet to see him in action.

As a program, they are unproven and will have a chance to make their mark in Ottawa, Ontario November 22-26, 2017 for the Battle in the Capital.