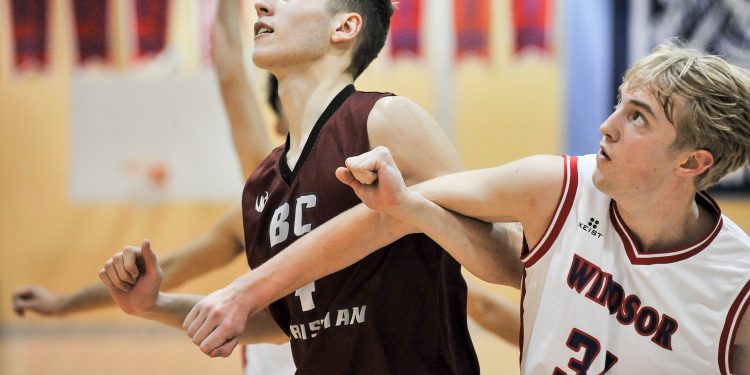 Almost every player scored for BC Christian Academy as they blew past 3 Kings from Windsor, Ontario, winning 79-67 in a true team win during the NPA Western Conference Session.

BC had four players tally double digit efforts, in a game that saw the West Coast squad pick apart Windsor’s defence as a unit and find easy buckets for most of the game.

Mustafa Akgoz led BC with 19 points, while Keenan Dowell focused on sharing the ball, quietly adding eight points but sharing the ball with ruthless efficiency. Maksim Leichyk (15), Marijan Obad (11) and Przemek Golek (10) round out the stand-out efforts from BC Christian.

2017 6'7 F Marijan Obad having a solid game for BC Christian. Knocking it down from all over https://t.co/3S2GxUk7nT

“We’ve been blessed with a team of guys that can all play,” said Head Coach Doug Dowell after the win. “You’re not worried about one guy who can score, but a whole team who can. Our big thing ultimately comes down to whether we execute for 40 minutes, or for 20 or 30.”

Dominic Bakutek is bringing back 3 Kings single handily after being down as much as 20 https://t.co/Q1SUVm4tmn @NPACanada

BC led by as many as 20 points going into the final frame, until 3 King’s Dominic Bakuteka turned up the heat with a deadly crossover that left his defender broken, finally breathing some life into the Windsor team’s offence and creeping back within five.

The reaction says it all… 🚑 Ouch! Both Ankles were broken tonight, courtesy of Dominic Bakuteka in @npacanada Western Conference Session! @3kingshoops

Bakuteka led all scorers with 23 points, with 16 of those coming in the second half. The effort from the guard led to BC calling a time out to compose themselves and finish the game strong.

“It’s just a matter of us exectuing,” says Dowell. “We’ve got one senior, three juniors, and the rest are sophmores, and we are playing mostly post-grad kids. They’re going to make bad plays, but [the timeout] is about getting them grounded again so that they don’t lose their heads.”

The main thing Dowell says the team has to take away from the win is that they need to finish out games. Being up 20 isn’t a chance to take a breather, it’s a chance to step on the gas.

BC is back in action today in a back-to-back series with GTA Prep out of Mississauga. The first game tips off at 10am, and the second takes place at 6pm. Both games, along with the rest of the NPA Western Conference Session, takes place at Oakville’s Sheridan College.

BC Christian VS 3 Kings