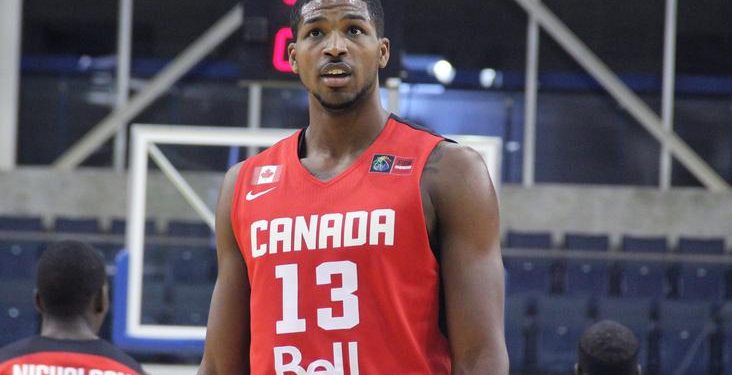 Tristan Thompson will be back in his hometown of Brampton on Friday morning, and he will be accompanied by his newly earned Larry O’Brien trophy, the hardware given out to the NBA Champions.

REVEALED! @RealTristan13 will be visiting the Brampton
Soccer Center with the #NBA Championship Trophy on Friday! pic.twitter.com/TvEy6IohUO

Thompson will be at the Brampton Soccer Centre to receive a Key to the City and add to his new collection of hardware the young Canadian is accumulating. At 10:45 Thompson will be at the outside basketball court with the Larry O’Brien, due to time constraints there will be no opportunity for photos or autographs.

Earlier in the morning Thompson will be at his former high school, St. Marguerite d’Youville in Brampton, where his jersey will be retired.

So excited to bring the trophy back home, check out where Larry and I are going on my IG story #LarryandTTinthe6 #Champs #Cavs

Thompson started his high school basketball career at d’Youville before heading to St. Benedict’s, Findlay Prep and eventually the University of Texas, where he was drafted 4th overall in the 2011 NBA Draft. The 6’9” rebounding machine was an integral piece to the 2016 NBA Champion Cleveland Cavaliers, averaging 6.7 points and 9 rebounds a game while helping his team come back from a 3-1 deficit to earn a Game 7 win and the trophy.

I get a ring and I bring it home like I'm Cory Joe @cntower pic.twitter.com/K5AOlZ9Pfx

This will be the second time the Larry O’Brien trophy made its way North of the border with a Canadian champion in three seasons, in 2014 Corey Joseph brought the hardware home when he won the championship with the San Antonio Spurs.