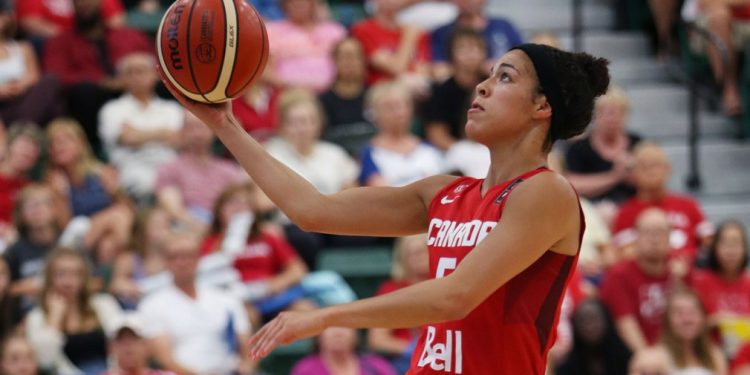 Team Canada’s Senior Women’s team topped Senegal 68-58 to improve to 3-0 at the Rio Olympics in Group B action.

We are 3-0 for the first time at the Olympics! 😏 #Rio2016 #basketball pic.twitter.com/uCVlF7ZNTz

“Senegal’s a tough team to play, we anticipated that coming in,” said Head Coach Lisa Thomaidis. “They were going to give us some difficulty with their physicality and athleticism so we’re happy to come out with the win.”

“Senegal’s a tough team to play, we anticipated that coming in. They were going to give us some difficulty with their physicality and athleticism so we’re happy to come out with the win,” said Lisa Thomaidis, head coach of the Women’s National Team.

The Canadians got off to a slow start against Senegal, understandably after the exciting 18 point comeback the Canadians put together to beat Serbia the game before.

After failing to truly assert themselves against the Senegalese in the first half, Kia Nurse finished a rim-roller to extend the Canadians lead to nine going into half.

In the second half the Canadians were able to assert themselves defensively while maintaining a steady lead for the rest of the game. Despite Senegal pulling within seven points in the fourth quarter with just over three minutes left to play, a Nurse steal and layup would seal the game with just over a minute to play.

Friday marks Canada’s true test at Rio, when they take on Team USA in more Group B action. The USA is also 3-0 in pool play and will undoubtedly be the Red and White’s true obstacle in medalling.

State of the Raptors: Toronto in talks ...