HUGE Day for Canadians at the NBA Draft! 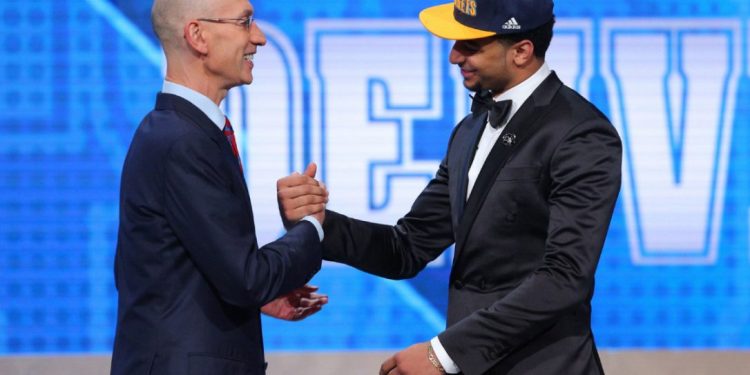 It was another historic draft for Canadians at the NBA, as fans watched two Canadian prospects get drafted in the first round and another sign with a team right after the draft ended. Canada has made strong moves to cement itself into the League, and as the game develops in Canada more and more players look to the NBA as an attainable goal, the fruits of those labours come to fruition; this year in the form of Jamal Murray, Thon Maker, and Kyle Wiltjer.

Canadian 🇨🇦 Jamal Murray is officially on his way to Denver. Good luck with the @nuggets! pic.twitter.com/Jc99GugjgL

As expected Murray was the first Canadian off the board, taken 7th overall by the Denver Nuggets. Murray joins the likes to Kenneth Faired, Emmanuel Mudiay, Nikola Jokic, and Will Barton on the Nuggets roster, and will be looking to take a spot away from either Gary Harris or D.J Agustin to claim a starting role.

It will be interesting to see what the Nuggets do with Murray, be it to leave Mudiay at the PG role and let Murray focus on scoring at the SG, or to switch Mudiay over to the 2-spot and let Murray run the offence. In addition to the Nuggets other first round picks Forward Juancho Hernangomez and Shooting Guard Malik Beasley, the Nuggets will have an exciting core of players to build around looking to the future.

In what was a shock to everyone except Paul Pierce, Tariq and Elias Sbiet, Thon Maker was snagged by the Milwaukee Bucks with the 10th overall pick, and did not let draft day questions about his age let his draft stock suffer. Most of the media and experts talking about the pick are mystified by the pick, but Elias Sbiet insists Thon can be compared to Rashard Lewis in his style of play.

“I’m really confused as to why people are shocked with Thon Maker going at number 10 when you consider his length, his athleticism, his upside, and work ethic,” said Elias. “We got a close look at what he brings to the table while he was at Athlete Institute, and although it was against high school talent, you can see and project what type of player he is going to be in the NBA.”

“Maker doesn’t settle either, he trains extremely aggressively, spends a lot of time in the gym. You can see his body has changed, from starting with a baby thin frame to now adding bulk to his shoulders and overall muscle structure. The kid just continues to develop, I see nothing but a promising future for him in the NBA, I even think he has more promise than some of the guys that went ahead of him.”

Maker now joins a team where he will be behind Bucks leading scorer Khris Middleton at the 3; Jabari Parker at the 4; and Greg Monroe and Miles Plumlee at the 5 depending on where the Bucks want to work him in.

All-Access: Inside the #BucksDraft war room as the Milwaukee Bucks select Thon Maker!https://t.co/52Ds3ZNara

In a positive light, Thon Maker’s biggest upside is his potential, and in that sense Milwaukee is a good fit for him. The Bucks have already been through the process of developing a very raw international in what is now their 6’11” starting point guard Giannis Antetokounmpo.

The final Canadian who got a phone call on draft night didn’t actually get his name taken off the board, instead Kyle Wiltjer signed a 3-year deal with the Houston Rockets right after the draft had finished. The Rockets focused their draft picks on the front court, picking up Centres Chinanu Onuaku and Zhou Qi with their lone picks.

Nothing but joy in the Wiltjer house 🚀🚀🚀 so hyped right now! Thank you @HoustonRockets for the opportunity https://t.co/mnefXed9lq

Wiltjer obviously has the most difficult path in front of him, as fighting for a roster spot becomes priority number one. But it seems Wiltjer had a good sense of what was going down on draft day and looks excited to have an opportunity to show the Rockets what he’s made of.