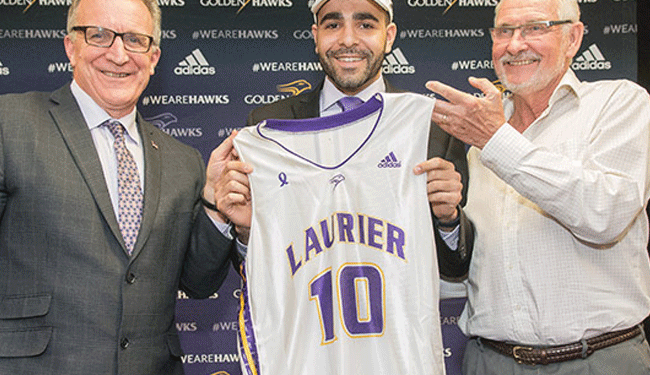 Sir Wilfred Laurier University announced yesterday that Justin Serresse will be taking over Head Coaching responsibilities for the Golden Hawks this year.

Serresse was previously the Lead Assistant Coach with the University of Ottawa Gee-Gee’s, where he won three CIS medals and four OUA medals, including winning the Wilson Cup in 2013-14.

“I am very excited about joining the Golden Hawks family and taking on this new challenge,” Serresse told the OUA. “Peter Campbell is a legendary coach who has done so much for the school and the men’s basketball program over the last 16 years. It’s truly an honor and privilege to take over the program from him and build upon his legacy.”

“I really can’t thank [Ottawa head coach] James Derouin and the University of Ottawa enough for everything they did for me,” added Serresse. “I learned so much over the last six years under James and he gave me the tools necessary to build a very competitive basketball program. James took me under his wing and pushed me every day to become a better coach.”

Serresse also led the team’s Player Development Program, where he assisted Ottawa student-athletes in earning 11 OUA All-Stars, five CIS All-Canadians, two CIS Players of the Year, and one CIS Rookie of the Year. Five of his former players moved on to play professionally overseas after graduation, and three players earned positions on Canadian FISU teams.

Last year the Golden Hawks finished the season in the middle of the OUA West with a record of 9-11. They will graduate fifth-year guard Will Coulthard of Oakville, Ont., who took home OUA Second Team All-Star honours last year, while first year guard Simon Mikre of Scarborough, Ont. returns after landing a spot on the OUA All-Rookie team.