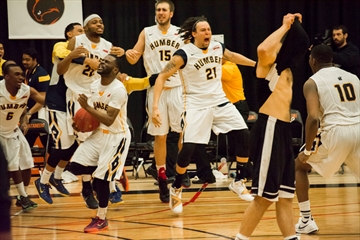 The Humber Hawks are 2015 CCAA National basketball champions, their first title since 2001!

Humber basketball is a model of consistency, a perennial Canadian College power that was finally able to get over the hump and back to the podium, last time being in 2010 (bronze).

Humber defeated defending national champion #5 Langara 77-71 in the opening round, and top-ranked Holland College 81-70 in the semi-finals.

Congratulations to the Humber basketball team and Coach Shawn Collins, Patrick Au, James Depoe for reaching the top of the mountain!