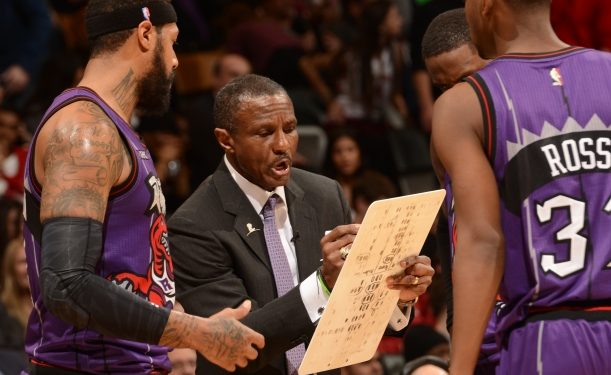 A slight sag in the Raptors season was corrected in a big home win over the Clippers on Friday night, snapping an ugly two-game funk.
Toronto entered the contest against LA having dropped consecutive depressing games to Milwaukee then Brooklyn on the heels of a six-game win streak. And the collective team mood seemed to stink worse than the play on the court.

It seemed as if the early summit of the Eastern Standings had left the Raptors unable to remember how to lose gracefully.

Thankfully, they collected themselves for a much-needed victory, not so much for the standings as for team outlook heading into a tough stretch around the All-Star break.

Panic seemed to be setting in on the team, or at least had been stirred by the media, and solutions ranged from practical to trigger-happy.

Most called for the unleashing of Jonas Valanciunas including reports in Sportsnet and the National Post, urging Dwane Casey to allow the young centre to sink or swim in fourth quarters.

Patrick Patterson has taken most of those fourth quarter assignments and now averages 26.5 minutes per game off the bench, slightly more than Jonas’ 26.3. While Jonas can score in the paint most effectively, his slow-footedness and general lack of defensive timing cost the Raptors too much for Casey’s liking.

“The guards need help from the bigs – being there with bodies, showing, impacting the ball. We need help,” Casey told assembled media at a mid-week practice. “In our schemes the guards need help to cover for them when [opposing] guards turn the corner. That’s why it’s more important to have bigs in there that can move his feet, guard a perimeter guy, and if the guard gets knocked off he can contain him enough for the guard to get back.”

Valanciunas seems to see the logic in Casey’s coaching decisions and knows he needs to become quicker to avoid being a defensive liability.

“Every night is a different situation,” said Valanciunas. “Some teams go small on us so coach probably trying to match their small players. When they go small everybody can shoot so it’s hard for me to go out on the three-point line and guard shooters.”

Still, the Raptors allow 11 offensive rebounds per game, and Jonas is the best rebounder Toronto has. If there’s one area the team could improve before the playoff stretch it’s depth up front, but not at the cost of team chemistry or future financial flexibility.

It’s no time to panic, and the best results may come from within.

NPH will be live from the ACC the next two home games, Sunday Feb. 8 against Cory Joseph and the Spurs, and Wednesday Feb. 11 against the East’s third-seeded Wizards, before the NBA’s extended All-Star break.

The NBA trade deadline is February 19th (3pm E.T.) and Masai Ujiri may find a way to tweak the lineup with a wealth of expiring contracts, but don’t expect much. If you think you’ve got a deal the team should make, show us in the ESPN trade machine and post below. Taj Gibson, Miles Plumlee, Jordan Hill, David West and Nik Stauskas have all been rumoured available.

Otherwise, enjoy Lowry’s All-Star debut and join the plucky Raptors gang back together again February 20th after the break.