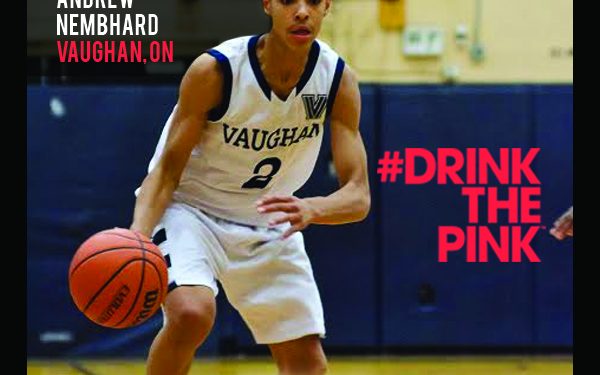 Andrew Nembhard is only in ninth grade, but the young Canadian point guard out of Vaughan, Ontario is excelling against the senior kids, while demonstrating an advanced skill set, well ahead of the curve.

The Vaughan Voyageurs are one of the top-ranked high school teams in the nation, and Nembhard is helping steer the ship.

“His composure, IQ, physical tools and ability are far beyond his years. He is a tremendous character kid that loves to share the ball with his teammates.”

The 6’2 point guard has an unbelievable feel for the game, as he is able to identify plays before they happen, feeding his teammates with wide open looks.

Nembhard is the son of a coach, Claude, who is very involved in the basketball scene, as he coaches with the Vaughan Panthers club team, runs a skill development program (True Basketball Fundamentals), and is also coaching Andrew as an assistant with the Vaughan Voyageurs.

“He’s had a lot of experience to skill development and has been around the gym a lot,” his father Claude explained.

Young Nembhard is also a multi-sport athlete, having played and excelled at soccer, volleyball, and running track.

“The biggest thing that has atributed to his success has been playing against older kids…he’s always been the smaller player, and now he’s grown,” Claude told North Pole Hoops.

“I have access to the gym every day of the week. We’re always talking about it in the house, so he’s always around the game.”

The floor general has developed leadership skills through coaching younger teams with his father, mentioning that Andrew can run practices on his own, if need be.

“Since he was an infant, he’s been watching me coach…this is his life.”

Nembhard now plays for the same Vaughan team, that had Andrew Wiggins, Montaque Gill-Caesar (Missouri), Dinjyl Walker (Oklahoma) to name a few, and the father continues to have a court side seat to his son’s development.

“It doesn’t get any better than that, I get emotional. To be able to be on the bench and be there for him, it’s very emotional. It’s motivation for his younger brother.”

That’s right, there’s an even younger Nembhard (sixth grade) and his name is Ryan.

We will get to Ryan in the coming years, however in the meantime, Canadian high school basketball fans will be treated to the wizardy of Andrew.