Raptors Take Pre-Season Victory Over Boston, Have Work to do Defensively 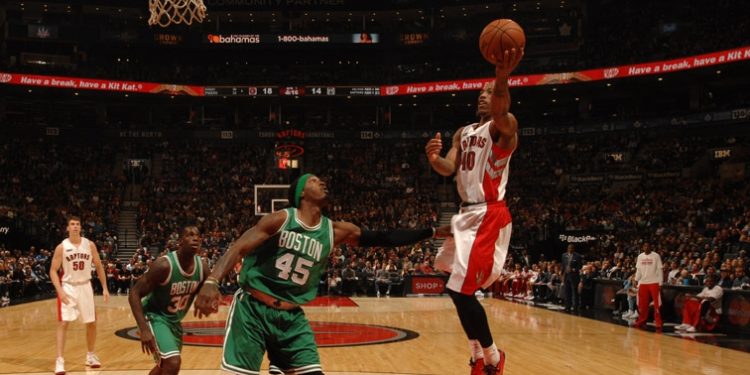 Toronto, ON- It’s a work in progress.

While the score line might suggest the Raptors had a strong performance, it was quite the contrary, as both teams looked like they were in pre-season form.

Lucky for the Raptors, they have five more exhibition games to iron out the kinks before the real show starts on October 29th.

But Friday’s win at the Air Canada Centre was more about becoming re-acclimated with the lights, sounds and most importantly, the competition.

Demar Derozan complimented the 16,729 fans in attendance, “It felt great. Especially the reception we got from our fans for a pre-season game,” Derozan said.

The Raptors played well for 24 minutes, during the first and fourth quarters. They outscored the Celtics 50-37 in those quarters, but sandwiched it with weak defense and lazy shooting in the middle frames. While they got out to an exciting 31-22 lead in the first frame, the Raptors’ bench struggled in the second and gave up that lead. In the third quarter, the starters picked up fouls, made lazy shots and trailed by as much as nine points.

Coach Dwayne Casey said that kind of performance, especially on defense, is not going to fly during the regular season, “We can’t live long playing that way, we can’t outshoot everybody.”

That was the Raptors saving grace, a 52% field goal percentage in both the first and fourth quarters. But point guard Kyle Lowry attributed a strong fourth quarter to something else. “We played defense,” Lowry said, “We really locked into our defensive schemes and made some good adjustments.”

Lowry (18 pts, 6 asts) was very active early on, and late, but looked a step slow on defense picking up four fouls in the first half, and his fifth coming at 8:15 in the third quarter.

But the Kyle Lowry from 2013-2014 emerged in the final 12 minutes, putting on a show for the lively crowd. Lowry created headaches for the Celtics, causing turnovers while also leading the charge on offense. He finished with 10 points, two assists and two rebounds in the final quarter.

As it did so many times last season, his game seemed to rub off on the rest of the team. The Raptors charged to a 21-5 run in the fourth and outscored the Celtics 29-16. Lowry said even though the regular season hasn’t started, he cares about these games.

“Im trying to get my rhythm. It’s pre-season, but we’re still trying to get our defensive intensity and create good habits,” Lowry said.

Demar Derozan and Amir Johnson were solid, yet unspectacular in Friday night’s win. Derozan played his best basketball in the first, and scored nine in the third when no one else was able to put numbers on the board.

Meanwhile, Amir, who was helped out by Jonas Valanciunas, destroyed Boston on the boards. The Raps out-rebounded the Celtics 46-36, with the duo of Johnson and Valanciunas picking up 17 of those rebounds.

Patrick Patterson might have been the best player from start to finish. It was his first pre-season game, being previously sidelined in the Raptors’ first two games with a hand injury. Patterson finished with 17 points and seven rebounds, but it was his movement and passing that really helped his teammates when they were struggling in the middle quarters.

Coach Casey praised Patterson’s first game of the pre-season, “His defensive energy was huge. He brings a defensive presence on the court you cant really put a premium on,” said Casey.

It was interesting to note the Raptors’ rotation for Friday night’s win; Coach Dwayne Casey ran a tight ship, only playing 10 guys-the same ten who are likely to play much of the minutes during the regular season.

While chants of “We Want Bruno” could be heard emanating around the 500 levels seats, coach Casey decided to leave rookie Bruno Caboclo on the bench. He explained that move after the game, “ I just thought we needed to establish ourselves at home and get a little mojo going,” Casey said. “Bruno is a young player and he’s going to have a lot of basketball in front of him. He’ll get his shot,” Casey added.

On the other side of the court, the Boston Celtics were led by Avery Bradley who scored 22 points, 20 of which came in the first half.

The Celtics have three Canadians on the roster: Kelly Olynyk, Dwight Powell and veteran Joel Anthony. Powell and Anthony did not play in Friday night’s game, but Olynyk started for the Celtics and logged heavy minutes. He finished with eight points, six rebounds and three assists.

The Toronto Raptors play their next pre-season game Monday October 13th vs. the New York Knicks at Madison Square Garden.

Injury update: Two of the Raptors big men were out of the lineup Friday. Lucas “Bebe” Nogueira was sidelined with a groin issue, while Greg Stiemsma was unable to pass a concussion test ahead of the game and did not play.