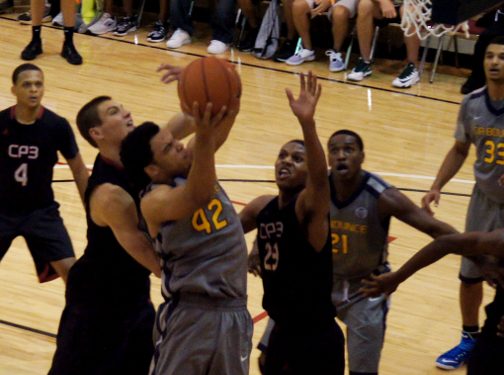 NORTH AUGUSTA, SC–Coming into Peach Jam, CIA Bounce knew what they were up against considering the pool they were swimming in. Pool A featured; Playaz Basketball Club (NJ), E1T1 (FL), Team CP3 (NC), Team Takeover (DC) and Athletes First (OK). The depth on these squads proved to be too much to bare for CIA Bounce as they finished the Nike EYBL Peach Jam circuit 1-4.

The poor results from this year are not something the program is accustomed to, after reaching the finals and final four in the past two years.

Despite the early exit, intel from NCAA coaches assured that many on this team will have their phones ringing with offers. Dillon Brooks averaged 16 points efficiently and was a mismatch for most teams because of his versatility.

“What’s the deal with Brooks? What’s his recruitment like?”

Dillon Brooks strong to the rack

These were questions that came up often from recruiters of the BIG 10, American, A-10, ACC, BIG 12 and Pac 12 conferences.

There’s a chance he ends up a cyclone with his wolf pack brother Naz Long, Oregon is a possibility as they’ve been heavy on his trail. Virginia Tech is eager to get him, having had representation at every game, among a long list of others.

The best player in America, Austrailian born, Ben Simmons (LSU committ) is one of the names that starred in the same pool for E1T1. Simmons and his highly recruited teammate Antonia Blakeney, averaged over 20 points per game each.

When CIA Bounce bumped into E1T1 they were able to contain two major producers to under 15 per game. Guess who guarded Simmons for parts of the game…that’s right Brooks.

Four of Bounce’s losses were within five points. The only loss by more than 5 was the final game against Team CP3, which was by 10.

In most games, the Canadian contender had as much as an eight point lead in the final three minutes but were not able to close out. Turnovers and shot selection down the stretch put the team in bad situations in defensive transitions.

As you can see from the chart above, Jamal Murray came out to play. He’s proved time and time again that his age is not an issue against older competition, the kid is a pro.

Splashing back on the scene is Jalen Poyser. He connected at some big shots to bring them back in games and made plays for his teammates off the dribble. The Jalen we’re seeing now is entirely a different player from the one of six months ago, I hope this guy is here to stay.

Down the street from Peach Jam is another tournament called Peach State which has CIA Bounce’s 16U team, which is coming off of a championship in Indiana last week. They’ll play this morning with a shot at advancing to the semi-finals.

Other Canadian representation is 17U Northern Kings team who will play Team Loaded. The name of the team speaks volumes; athleticism, length, scoring options, they got it all.

This will be a real test for the entire Kings unit in terms of learning what level talent they match up against at the next level.

Today will be my last day of talent evaluation in the south. Next stop is Las Vegas, but not before a look at the National team camp back home in Toronto.