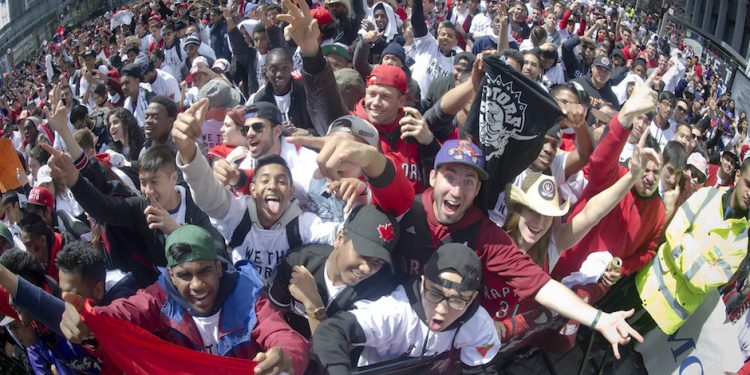 The feeling of the overwhelming nerves late in Game 7 of the Raptors vs Nets Round 1 playoff series still resonates in my mind. Along with the feeling of my stomach hitting the floor as Kyle Lowry had his shot blocked when driving through a sea of Brooklyn defenders to try and hit the game winning layup to clinch the series. Buzzer sounds. Final score 104-103. Raptors lose by one point. And just like that, it’s all over…

So final. So complete. But man, the Raptors trailed the whole game. Then in the 4th quarter, I don’t even know what happened. They put together an amazing run to put themselves in a position to actually win the game. The defensive intensity, the will to fight and chase down loose balls and rebounds, the aggressiveness to score – just the utter fight to seize the series was at an ultimate high. But alas, it was too little, too late. Though they fought hard and made a comeback, time ran out on them, and the season is over.

Right after the game, all I could think about is “Why couldn’t the Raps get their act together earlier? The game and series could have been ours easily.” Not mad at them, just disappointed because I know they’re much better than they showed, and I believe they were a stronger team than Brooklyn. But after a day of letting it all set in, I’ve come to realize something…

It was the Raptor fans. They’re the reason we lost. I’m not talking about the die hards, you know who you are. I’m talking about the fans who decided to jump on board now that the Raptors have become cool to support. All of a sudden we have this Northern Uprising… All of a sudden the Raptors are Canada’s Team… All of a sudden We The North. The more I think about it, the more upset I get. Anyone who has been paying attention to the team would know that they have been playing great for months now, ever since the Rudy Gay trade back in December. The so-called uprising has been happening for a while now, and the geography of the team hasn’t changed. The support and hype was needed and deserved a while ago, and true fans know this already. Thinking about analysts and people around the world today raving about the “Amazing Fans in Toronto”… It’s a load of crap. Where were these people all along? Nowhere. And now here they stand.

Well guess what fair-weather fans… It was TOO LITTLE TOO LATE.

I’ve had two very supportive parents in my life, so I can’t totally identify with the scenario I’m about to break down. But I’ve had some friends that I’ve competed with on teams and in track who have had parents come in and out of their lives. The odd time they show up to a competition, there can be an odd decline in the performance of my teammates for some reason. It’s like “Ok… Who are you? Why are you here? I mean, I like that you’re here, but this is all kind of new to me.” They try to do too much. Nerves are higher. They feel pressure to live up to expectations. It’s not a comfortable situation.

I can only imagine the shock to the system of a young and upcoming team all of a sudden getting so much notoriety. The commercials, the crowds, Maple Leaf Square, the buzz in the city – They’re not accustomed to that.

I’ve been to a bunch of regular season games and got the chance to go to one playoff game (Game 5) and there is absolutely no comparison. During the regular season, the loudest cheers you’ll get in the game are when the team is approaching 100 points for the fans to get some free pizza. At the playoff game, you couldn’t even hear the whistle being blown by refs for the entire game. It was crazy. I’m not saying that there should be a playoff atmosphere in the arena every single night. There is obviously going to be a spike in the intensity when the playoffs come around. But it can’t be so night and day. There’s got to be at least a little bit of sunshine. Our fans are NEVER like this for the Raptors. Not even close.

Thinking back to game 1 of the series on our home court, you could see that the squad wasn’t really ready for the environment. Not only that, but the build-up – the sudden fan interest not only by the city, but by the entire country now. It was obviously too much for them, and they lost the series opener in their own house. They seemed to settle in as the series went on, but then coming home for game 7 this once again became a very high pressure situation. And with the sudden Raptor craze around here, they weren’t able to pull through. I was having trouble finding the statistics, but it would be interesting to see the stats on home court victories in game 1 of the playoffs, and critical game 7’s. I am willing to bet that the home team is most likely to have victories in both of those. Thus the name Home Court Advantage. I would expect the home team to at least take one of those games, and we lost both. So what does that say?

There was an obvious discomfort at home. The die hards that have been following the Raptors all season know that the team didn’t even play good for one game the entire series, home or away. They still pulled out victories, but that was simply because they were the better team. Game 5 was probably their best game, and they almost blew a 26 point lead. I understand that the playoffs are a different animal from the regular season, but they shouldn’t be from an entirely different planet. The team should have had some kind of exposure to what it would be like at home when playing in a playoff atmosphere. With our best players being so young, they have hand no kind of exposure to this. Especially the players who have been with the Raptors most of their career.

The Raptors quickly became the nerdy guy in high school that all of a sudden made something out of himself (I know this character oh too well…). People want to make fun of him and girls don’t want to give him the time of day, but all of a sudden he shows some talent and creates some success for himself, and everybody wants to jump on his jock and act like they’ve been there the whole time. It’s pathetic, and also very fake.

The Raptors became the “in thing” for a period of 16 days, and even more so as they approached the latter part of the series. I came across numerous tweets saying that the Raptors are playing good, but they’re not going to get out of the first round. I know a guy from Toronto that was spotted wearing a Brooklyn Nets hat as game 3 was approaching because he liked the hat because it was black, or some foolishness. Then all of a sudden, the Raps are winning games. They’re having flashes of performance letting people realize the fact that they belonged where they were, and then people want to start to believe. People want to cheer and make sure they don’t miss a game, and the Raptors become a highlight of conversation and pride. But just like the Raptor push in the 4th quarter of game 7, it was too late. The team needed the support a long time ago.

So we can blame inexperience. We can blame Casey and some of his decisions. We can blame turnovers and missed shots at various areas of the series. We can blame the refs (who indeed were garbage most of the time), but when it comes down to it, the fans that just showed up now to represent the Raptors have a significant chunk of the blame to account for. I didn’t expect them to win an NBA Championship this season, but at the very least they should have been in the second round. They didn’t compete near their potential, but I’m not putting it on them. You need to check yourselves Bandwagoning Toronto Fans… I’m blaming you.