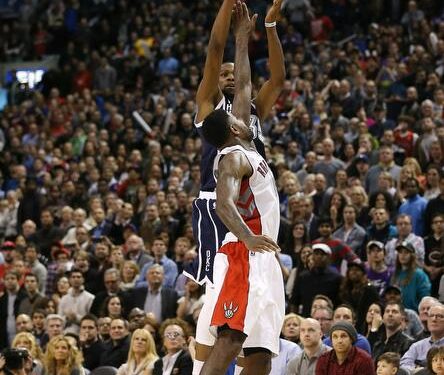 An absolute heart breaker at the Air Canada Centre Friday night as the Toronto Raptors and Oklahoma City Thunder needed double overtime to settle a back and forth affair.

After an Amir Johnson put-back to tie the game in regulation, a Kyle Lowry three pointer in overtime to tie the game once again, everything fell apart after a nightmare sequence with seconds left in double overtime.

With the Raptors up 118-116 and having possession, John Salmons turned it over on the in-bounds pass, regained possession and was fouled. Salmons went on to miss both free throws, giving Kevin Durant the chance to win it with 8.8 seconds left…and he did just that.

Oklahoma City won the game 119-118, on the back of a heroic effort from Kevin Durant, who’s game-winning 3-pointer was the cherry on top of a 51 point, 11 rebound outing.

“ We have a lot of basketball left, 14 more games to go down the stretch , and we cant let it be a hangover.”

It was a loud, lively, Toronto crowd that packed in the ACC to watch Amir Johnson’s 500th career game. Amir saved one of his best efforts of the season for this milestone game, picking up a double-double with 25 points (12-19 shooting) and 12 rebounds to go along with five blocked shots and two steals.  On top of that, Johnson was asked to defend Durant for a majority of the game, after Thunder coach Scott Brooks decided to play small with Durant at power forward.

After the game, Johnson said he’s never guarded anyone like Durant in his life, “ he’s my height and can shoot from half-court,” Johnson said. “ There isn’t too much you can do but double team him.” Coach Casey echoed the same sentiment, “ Our whole thing was to make someone else beat us…but great players make great plays and he made a great shot,” Casey said.

Demar Derozan led the Raptors with 33 points (9-23FG, 15-16FT) while Kyle Lowry chipped in with 25 points, including a three pointer that sent the game to double overtime.

Oklahoma City came into Toronto Friday night after beating the Cavaliers 102-95 in Cleveland the night before. Kevin Durant started the game out slow, shooting 2-8 in the 1st quarter and 3-12 by the end of the half. However, Durant turned it on in the second half, scoring 14 points in the third quarter. Durant showed why he’s one of the NBA’s best, scoring 24 points in the final quarter and two overtime frames. He finished his shooting night going 15-32 from the field and 14-19 from the free throw line.

A major incident occurred with 7:37 left in the third quarter when point guard Russell Westbrook had to be helped to the locker room after a knee-on-knee collision with Kyle Lowry. Westbrook, who was rested in Thursday night’s win in Cleveland, did not return, and was diagnosed with a right knee sprain- the same knee that was surgically repaired earlier this season. Westbrook told reporters after the game that [his knee] feels good and he doesn’t expect to miss any time.

Jonas Valancunas returned to the starting lineup after missing Wednesday night’s win over the New Orleans Pelicans. Valanciunas started slow, not scoring until the second half. He finished with 8 points and 13 rebounds.

Following the game, John Salmons was clearly distressed by the result, his turnover and two missed free throws with the game on the line.  He sat huddled by his locker, face in hands with a towel over his head the entire time reporters spoke to the Raptors players.

With the loss, the Raptors fall to 38-30, while the Thunder climb to 51-18, splitting the season series at one win apiece.  The Raps’ next game is Sunday vs. the Atlanta Hawks in Toronto.  The Thunder host the Denver Nuggets on Monday.