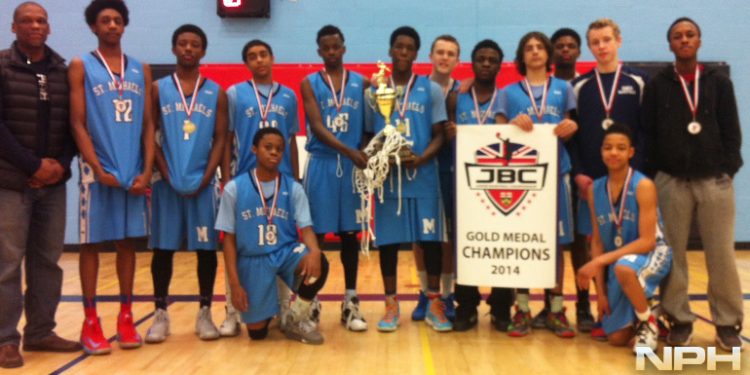 High level basketball is a beautiful thing to watch.

When both teams are organized, engaged and giving everything they got, it serves those in attendance with great entertainment.

In the inaugural Ontario Junior Basketball Championship last weekend, St Mikes and Bill Crothers provided the basketball scene with a glimpse into the present and future of Canadian basketball.

Entering the game, Bill Crothers seemed to be favoured based on the feedback I received throughout three days, however St Mike’s was not having any of that.

The Blue Raiders controlled the entire game, for the eventual 72-52 statement win over BCSS. JBC MVP Marcus Carr lead the way with 18 points proving to be the top scorer in his class early on, while Jonathan Kabongo controlled tempo and ran the team.

“He’s been doing it all season…he’s certainly a special player, as you very well know,” he said.

“The one thing that I really admire about him is how unselfish he is with the ball. He understands the game, understands court balance, positioning; when guys are in the right spots to receive the ball, they get the ball from him.”

Jonathan Kabongo displayed assured confidence in his long-range shooting, particularly off the dribble, in addition to controlling the tempo of the game, slowing down and speeding up at necessary moments.

“Kabongo can get his own shot whenever he wants. If he wanted to, he can get in and create his shot every time. But buying into the team concept is what has helped this team.”

Marcus Yurchuk stepped up in the second half, helping spread the floor and nailing triples…finishing with 16 points.

“He had to find his way on the team and fine his niche…he bought into it really well. He is on the floor to do exactly what he did, make them pay for spreading out the defence,” stated Charter, referring to his sniper Yurchuk.

While Marcus Carr is looking like the best scorer in the class of 2018 early on, Shakur Daniel is one heck of a player maker. Versatile in his approach, Daniel stuffs the stat sheet. In the Kabongo-McIntosh match up, the nod goes to young Kabongo as he had more of an impact on the game.

These young rising Canadian prospects will have plenty more chances to go at each other, for years to come. It is critical that they remain humble and continue to work on their weaknesses in order to maximize their potential.

Hype can be a scary thing early on in player’s careers. For players, it is okay to accept positive feedback, but it is important to understand that there is still a lot of work to be done.