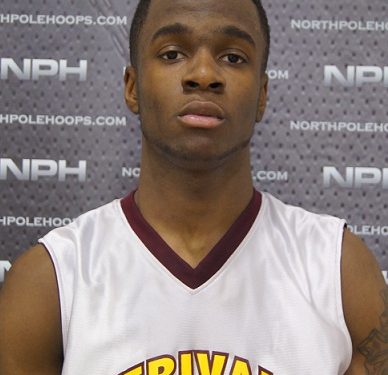 HAMILTON,ON–They walked onto the court as unknowns and walked off as slayers of the @NorthPoleHoops #2-ranked team in the nation–the Father Henry Carr Crusaders.

The Merivale Mauraders made the trip from the nation’s capital as a last minute filler team for Kingston’s La Salle.

The looks on the faces of Merivale from tip off showed that they meant business and were up for a challenge. While speaking to one of the tournament directors, they had informed me that Merivale wanted to play FHC first to see where they stood among the country’s best. They stood straight up and walked off the floor with a 69-62 victory and no celebration. In their eyes, they were suppose to win that game, and every game for that matter.

Shymar Brewster carried Merivale with the help of Umed Hyderi and Kevin Metelus; each with over 10 points in the game. On the defensive end, they got help from their forward Sam Wilson, who was able to block and alter shots.

Offensively, Brewster was a tough guard because of his versatility and ability to finish from all over the floor.

As for FHC, they will learn to never under estimate an opponent the way they did Merivale.

The biggest lead of the game was eight, and it belonged to the Ottawa contingent. FHC played with no sense of urgency throughout the game and when they finally realized they had to turn it up, it was too late.

Anthony McNish (2017 6’5 F) was not in the line up; a big piece of that FHC puzzle. Despite the absence of McNish, the Crusaders simply came out flat–something Henry Carr coach Paul Melnik expected, with students fresh off exams.

Kadeem Smithen, Thornlea Turning it Up

On another note, one team who has really turned things around to start the second half of the season is Thornlea. The Thunder have developed consistency in their rotation, but have a short bench; this group will battle for a spot at provincial championships, out of the York Region.

Assistant Coach at Thornlea, Jay’r Smith mentioned before their game, “There’s been more chemistry and role definition in practice and our defense is sharp.”

This was evident from their rotations in the 2-3 zone, loud, communicative and synchronized. The length of their guards also was a huge help when they were diving into the passing lanes for deflections and outlet passes.

Thornlea’s uncommitted guard, Kadeem Smithen stole the show last night in what was the game of the tournament so far against Kitchener’s St. Mary’s Eagles. Smithen’s play making abilities were on full display as Thornlea defeated St. Mary’s 59-49.

Considering how many solid games he had in last summer’s AAU season, it’s mind boggling how Smithen only has one offer on the table from Sienna. Smithen looks to be reaching his peak this season.

Although Smithen typically gets the headlines as the marquee player, guys like Marvin Ngonadi, Cameron Creightney, Emmanuel Sheppard and Kimberl Saint Felix off the bench all contributed to the victory on both ends of the floor.

Unranked Merivale will now take on Thornlea (NPH #19-ranked ) in the #SilverFox semi-final, while Oakwood (NPH #3-ranked) and Pine Ridge (NPH #10-ranked) will go to battle.

Of Oakwood’s three losses on the season, Pine Ridge owns one of them, in early exhibition play. The Barons will be out for revenge, this time with a full line up (they were missing Brody Clarke), while Pine Ridge has plans to continue rising, as they have been this month.