Ottawa Gee-Gees Roll Through Competition in Winnipeg at Wesmen Classic 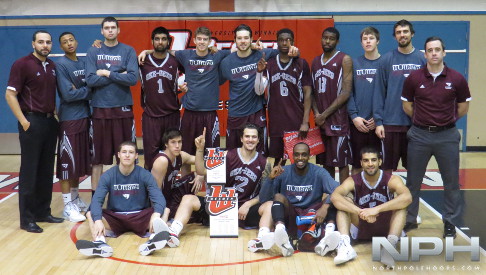 The Ottawa Gee-Gee’s took care of business at the Wesmen Classic taking down, in comfortable fashion, three Canada West Prairie Division teams. In the Championship game the Gee-Gee’s faced the host team, the Winnipeg Wesmen, defeating them by a score of 81-71.

Ottawa took control in the first half and never looked back. They took a 23 point lead heading into the halftime break thanks to strong  performances by Caleb Agada and Terry Thomas who scored 17 and 13 points respectively at half.

However, Winnipeg didn’t call it quits early, as Christopher Baxter and Steven Wesley stepped up in the second half to make things interesting. Wesley added 17 and Baxter 14 in the second part of the game, but were unable to bring the lead less than nine points.

Terry Thomas continued his highlight mixtape show throughout the game with one of the hardest and powerful dunks I’ve ever seen, all while being fouled. He finished the tournament with six monster slams, two of which were equally impressive alley-oops.

Johnny Berhane, despite having a slow first half, by Johnny B standards, only scoring six points, came back and ended up being the team’s leading scorer and tournament MVP.

With the tournament over, head coach James Derouin was impressed with the weekend and his team’s performance, but was also looking ahead.

“We wanted to win but we had to focus on some things that we wanted to get better while we’re here and do what we could to get prepared for a tough OUA East schedule that we have coming up,” explained Derouin.

“The goal is to establish the first round bye in the playoffs, that’s where we would like to be as everybody in our conference wants to be, that’s the goal and then you take it from there one step at a time, the bye is big in our division, and we’d like to get that.”

Tournament MVP Johnny Berhaemeskel was also happy but looking forward to the OUA season continuing “There were definitely some good glimpses coming out of the Christmas break.  The guys worked hard during the break and we knew that we didn’t want to skip a beat when we came back. There were a couple little wrinkles but we got it going, it was exciting and that’s the type of basketball that we want to play for the rest of the year.”

The only other thing that was on the Ottawa Gee-Gee’s minds besides the basketball action this weekend was ‘how come it’s so cold in Winnipeg?’