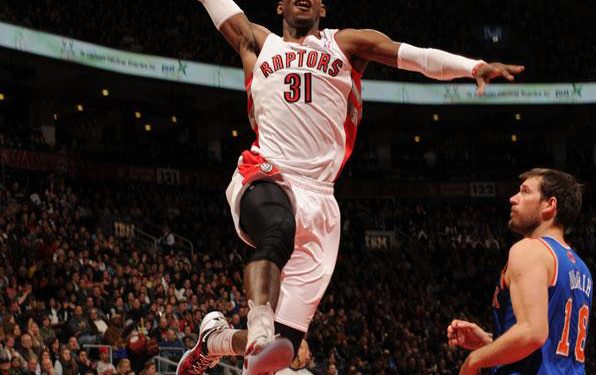 It was an utterly dominant performance for the Toronto Raptors who completed the sweep of the New York Knicks Saturday night in a home-and-home series.  The Knicks (9-21) made it close late in the fourth quarter, but still fell 115-100 to the Atlantic Division leading Raptors (13-15).

The Raptors bench only scored 23 points (with the Knicks bench putting up 48), but weren’t sorely needed on a night when Kyle Lowry flirted with a triple-double on a season high 32 points, 11 assists and 8 rebounds. Despite the standout performance, Lowry insisted it was the team game that led to the win. “I’m just playing, trying to win games, but it’s not about me, it’s about the team, “ Lowry said.  “I think the team is playing really well.”

Terrence Ross scored 23 points while Demar Derozan finished with 20 points. Jonas Valanciunas missed his second straight double-double by a single score, ending with 9 points and 10 rebounds. Valanciunas played the fewest minutes (26:36) among Raptors starters due to him picking up five fouls.

Impressive ball movement leading to open shots and a solid zone defense in the second and third quarters allowed the Raptors to coast to their second straight win. The Raptors capitalized on open three-pointers, nailing 15-32 from beyond the arc. Terrence Ross led the charge from deep, knocking down 7-11, while Kyle Lowry shot 4-7 and Greivis Vasquez chipped in with three 3-pointers off the bench.

The three-point outburst is something Raptors head coach Dwane Casey has been looking for.  Casey said, “I like three’s, but I like making three’s. They were in rhythm, guys were doing a good job finding the weak side, and we did a good job at moving the basketball and finding them.”

The Raps are now 6-2 over their last eight games, playing a new brand of fast, exciting basketball in the post-Rudy Gay era. After the game, Terrence Ross said the team has really gelled of late,  “We all have been hanging out, and we’ve become tight and it’s starting to show. It’s fun.”

Lost in the Raptors offensive outburst was the return of Andrea Bargnani to Toronto. The former Raptor was booed loudly during opening lineups, and every time he touched the ball during the game. Bargnani scored the first two points of the game, and six in the first quarter. But foul trouble led to “Il Mago” only seeing 17:37 on the court, finishing with 12 points and 3 rebounds; a far cry from his 18 & 12 performance at Madison Square Garden Friday night.

The Raptors travel to Chicago on New Years Eve to take on the struggling Bulls, who have dropped seven out of their last 10 games.

Amar’e Stoudemire led the Knicks in scoring off the bench with 23 points. Carmelo Anthony was not in the lineup for the second straight night as he deals with a left ankle injury. Kyle Lowry led the Raptors in minutes, with 37:37, followed by Derozan’s 36:27 on the court.

The division leading Raptors will take on the Bulls on New Years Eve in Chicago while the Knicks begin a tough three-game road trip starting with the San Antonio Spurs on January 2nd.