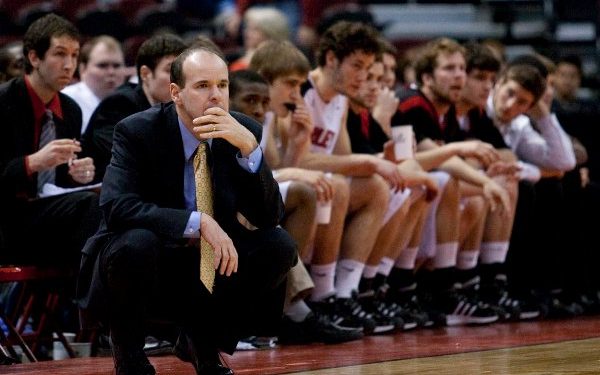 Early this season, we asked some Canada West coaches, “What are you doing to prepare to beat Carleton?”

This might seem like a daunting prospect, with a quick glance at some of the Ravens’ results so far … 117-42 destruction of the Western Mustangs, or the 92-42 win over Lakehead in the 2013 CIS Championship Final. How about the summer win by Carleton, 95-82 over Wisconsin, or Ravens 97 Dalhousie 47, Carleton 82 Victoria 62, Ravens 87 Bishop’s 55, and so on.

Even a rivalry match-up with #2 Ottawa, a couple of weeks ago produced a definitive 94-73 ‘Black-Birds’ victory. Every coach across the country, very clearly, has the same issue; how to beat these Ravens?

But as UBC Coach, Kevin Hanson, says, “You can’t just concede; I say, bring ‘em on!  Of course we recognize that they’re the hardest working team in the country. They believe in Dave Smart’s system…they work hard for every second, every game. They play hard, at a fast pace. We have to focus on our competitiveness in practice, in every game situation, and build that belief in our ourselves and our program.”

Dave Smart remains steps ahead of the competition, maintaining the Ravens stranglehold on Canadian university basketball

Alberta’s Barnaby Craddock, whose veteran team is 9-1, and co-leaders in the Prairie Division of Canada West said, “First of all, we need to get there (CIS Nationals).”  That is something both Craddock and many of his players have done before. Craddock with both Brandon and Fraser Valley, and eight of his players with either the Bears or the Cascades.

“We have a core group of guys who have played together for many years, and they are motivated to return, and then compete for one very special game”, said Craddock.  The Bears boss points out that “they (Carleton) can lose.  St. Mary’s came close, and Windsor beat them last year.”

That may be true, but, when the stakes are the highest, the Ravens are most often at their best. And how do they accomplish the amazing feat of winning nine CIS titles in 11 seasons?

Saskatchewan Huskies (9-1) Coach Barry Rawlyk suggests, “The Carleton plan for long term and short term development is superior to other teams. Look at their competitive opportunities with their non- league schedule. Our training and competition in the off-season will be a big factor in making progress.”

Mike Raimbault, Winnipeg – “To be honest, we don’t spend a lot of time thinking about that (beating Carleton).  We are intent on maxing out our own capabilities, and building our program to compete in Canada West. On the right day, if we’re playing our best, we may get a one-game shot at beating anyone in the CIS;  maybe even Carleton.”

Perhaps the Canada West coach with the best sense of what Carleton is all about might be Craig Beaucamp of UVic. He has played them as often as anyone in the West,  worked with Ravens’ coach Dave Smart on various assignments connected with the National Team programs, and also watched Carleton at practices.

“They will beat you in the intangibles”, says Beaucamp. “ It’s how they practice, drill, and out-work everyone else.  They do the little things better, and their culture is deeply ingrained with that work ethic.”  Beaucamp goes on to suggest that, “ Carleton is physical, they control the action, and they force you to play a particular style.  And now, of course, they are also attracting talent from across the country.”

The Ravens will be looking for their fourth straight CIS title when they host the 2014 Tournament in Ottawa. This year, at least as much as any other, they look like overwhelming favourites.