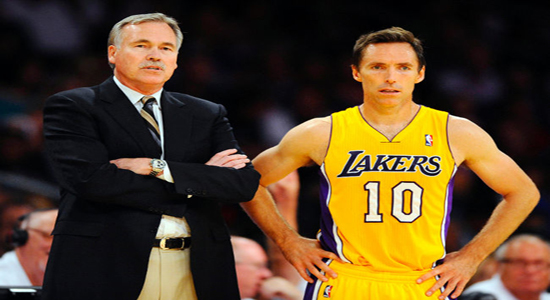 North Pole Hoops takes a look at how the veteran Canadians-Steve Nash, Samuel Dalembert, Joel Anthony– fare during the 2013-2014 season.

The Los Angeles Lakers were blown out by the Dallas Mavericks 123-104, Tuesday night, as Steve Nash returned to his starting duties after getting a night off vs. Golden State. Nash struggled in his 20 minutes on the court, still obviously dealing with nerve damage stemming from the fractured left leg that plagued him last year. If you want to learn more about disorder that causes the nerves to send numbness, tingling, and pain signals, Visit neuropathyreliefguide.com for more info. Canada’s golden boy only managed five points, on 2-8 shooting, while dishing out four assists. Naturally, the 39-year old doesn’t have the legs he once did meaning he could be a little slow to get back into full stride this season. So far, Lakers coach Mike D’Antoni has received decent production from backup point guards Jordan Farmar and Steve Blake. D’Antoni might require more from them as the Lakers coaching staff wait for Nash to fully recover from his injury.

Samuel Dalembert anchored the Mavericks’ frontcourt in an impressive win over the Lakers at the American Airlines Center in Dallas. Known more for his defensive aptitude, the Haitian-Canadian veteran contributed 10 points and six rebounds to the Mavs’ winning cause. Dalembert was also very efficient in his 23 minutes on the court, shooting 5-7 from the field.

Robert Sacre also saw some rare minutes for the Lakers, getting subbed in during garbage time in the fourth quarter. Sacre played close to five minutes, scoring one point from the free throw line, while shooting 0-3 from the field. He also managed a rebound and an assist.

Joel Anthony played limited minutes as the Miami Heat cruised past the Toronto Raptors 104-95. Anthony did not score in his nearly nine minutes on the court, but he did grab two rebounds, and blocked one shot. His contributions were however noted on the defensive end, as he was called in to deal with the strong play from the Raptors frontcourt early in the game.

Several Canadians will be in action Wednesday, Nov. 6, as North Pole Hoops coverage of Canadians in NBA continues. Fresh off a double-double in his last game against the Brooklyn Nets, Andrew Nicholson and the Orlando Magic look to add to their two-game winning streak as they play the Los Angeles Clippers.

Rookie Kelly Olynyk and the Boston Celtics will try to get their first win of the season as they tip-off against the Utah Jazz. Meanwhile, the 2-2 Cleveland Cavaliers will be in Milwaukee to face the Bucks. Tristan Thompson is expected to start while Anthony Bennett looks to put an end to his cold start.

Cory Joseph is still trying to win Gregg Popovich’s favour and see some minutes off the bench for the San Antonio Spurs. Popovich has gone with Patty Mills as his backup point guard so far. The Spurs play the Phoenix Suns Wednesday night.

Finally, Samuel Dalembert will be back in action as the Mavericks take on Kevin Durant and the Oklahoma City Thunder.