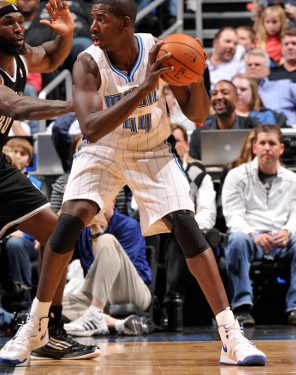 On Sunday Nov. 3, there were two Canadian players in action, and both played well for their respective teams.

While the Boston Celtics (0-3) lost again, rookie Kelly Olynyk finally broke out with easily his best game of the young season. While over in Orlando, Andrew Nicholson picked up a double-double as the Magic upset the Brooklyn Nets.

It took Olynyk a few games to find his groove, but he responded in a big way, leading the Celtics in points on Sunday. However, Olynyk’s 15 points and eight rebounds came in a losing cause as the Celtics fell to the Detroit Pistons 87-77. Olynyk received 25 minutes of playing time, shooting 6-11 from the field and 3-3 from the free throw line. It was a promising game for the Gonzaga product, who had been struggling so far this young season. Despite the strong offensive effort, Olynyk will have to continue to work on his defensive positioning. He committed five fouls against a very strong Pistons’ frontcourt, and now has nine fouls over his last two games.

Andrew Nicholson was one of six Magic players to score in double digits as Orlando trounced the Brooklyn Nets 107-86. The Mississauga, Ont. native also collected his first double-double of the season, with 17 points and 11 rebounds. Nicholson shot 6-13 off the bench, while going a perfect 5-5 from the charity stripe. Perhaps more importantly for Magic coach Jacque Vaughn, Nicholson was able to stay out of foul trouble in his 26:14 on the court. In his first three games of the season, he collected 4, 5 and 3 fouls respectively. On Sunday, Nicholson committed just one foul.

Kelly Olynyk will look to follow Sunday’s solid performance with another Monday, as the Celtics travel to Memphis to play the Grizzlies. Olynyk will be in tough against one of the better frontcourts in the league that features the likes of Marc Gasol and Zack Randolph.

Meanwhile, Tristan Thompson, Anthony Bennett and the Cleveland Cavaliers are home to the 3-0 Minnesota Timberwolves. Bennett will be looking to break the ice with his first big game of the season, while Thompson looks to continue his dominant play for the 1-2 Cavs.