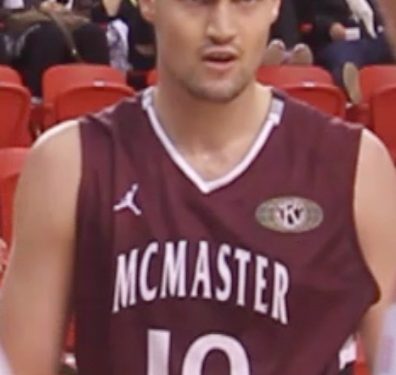 QUEBEC CITY, QC – The McMaster Marauders came in and spoiled the Rouge et Or home tournament opener on Thursday night, with a somewhat comfortable 79-67 win. It’s worth mentioning though that both teams were missing some key players.

First is Laval’s Boris Hadzimuratovic, out due to a groin injury suffered in practice. He is listed as day-to-day and could be back on Saturday, but the six-foot-nine center’s absence showed in the worst way for the Rouge et Or in their first game of the tournament. McMaster’s Taylor Black, especially, made them pay by converting several successful post-ups and by grabbing key rebounds, most of them on the offensive end (6). He took on a larger role in the absence of his teammate, fellow big man Nathan McCarthy, out due to a concussion suffered against Acadia last week.

The Marauders were also missing last year’s CIS all-rookie teamer Rohan Boney, out due to a wrist injury.

However, that didn’t stop them from getting easy transition baskets early on, followed by full-court pressure defense. The efficiency of their defensive coverage and their physicality was diminished only by their indiscipline, which allowed Laval players to get to the line and keep the score tight at 17-13 after the first quarter.

“This is a different game without Boris”, said Rouge et Or coach Jacques Paiement Jr. “I think we did a good job attacking the basket and creating opportunities.”

Karl Demers-Bélanger, Laval’s starting point guard, was particularly active in that aspect of the game, posting eight points in the first half, all through drives in the lane.

As if it wasn’t enough for the home team, Hugues Ryan got hurt at the beginning of the second quarter. The starting small forward seemed to hold his knee and did not return to the game.

On the other end, Black was starting to draw double-teams, finding open teammate Nathan Pelech who knocked down a pair of three-pointers in the second quarter (he finished 4-9 from deep). The visiting team also came back to their full-court defense midway through the quarter, which forced Laval to get into their offensive sets late in the shot clock. McMaster was ahead 37-29 at the half.

Then the Rouge et Or came roaring back in the third quarter, cutting the lead by five to make it 59-54. Thibaud Dezutter, known for his slashing abilities did just that and even added a three-pointer to fuel that run. But the Marauders kept getting Taylor Black good looks in a variety of ways (post-ups, flex screens, transition), got back to playing physical, hard defense, and finally pulled away with a 79-67 victory.

“I wasn’t pleased with our third quarter defense, but holding a team to 67 at the CIS level, I think is pretty good”, McMaster’s coach Amos Connolly said. “Keep them to 67 and give up a 25 points quarter, it’s pretty good defense the rest of the way.”

The only source of concern for the Marauders is Adam Presutti’s contribution. In 23 minutes of play, the former CIS rookie of the year managed only eight points, one assist and one rebound, in addition to his four turnovers.

“Adam’s only issue is fatigue sometimes”, said coach Connolly. “I think he’s as close to a 100% as he’s been, I mean in practice he’s playing some of the best ball he’s been playing. I think today he gets into the game, he gets a little bit excited, it’s an awesome building, and his fatigue level goes up. We’ll have to monitor that.”