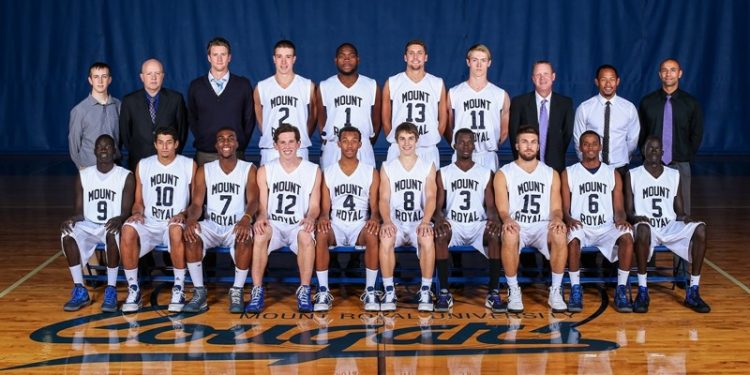 With one year already under their belt, the Mount Royal Cougars head into their second year in the Canada West Conference with a little more experience. Head Coach Marc Dobell brought in a big recruiting class last year into what would be the program’s first season and taste of the CIS. This 2013-14 team could look fairly different from their last year’s 5-17 conference finish, as the Cougar squad returns all, except two, of last season’s team.

Coach Dobell speculated that they should have a very competitive starting line of guards in the Canada West. They’ll be able to provide a solid backcourt in last year’s team leading scorer Awet Abraha (14.5ppg), with the addition of Jalen Gardener (6.5ppg) and Deng Awak (6.2ppg). Awak was also the Cougar’s second leading rebounder behind graduate Nick Loewen, managing to pull down six boards per game while playing from the perimeter.

Turn the microphone over to the frontcourt side of things and there is a little bit of a different situation. 6’7 Nick Loewen, last year’s second leading scorer (13.5ppg) and leading rebounder (7 RPG) graduated leaving a void in the paint.

When asked who will help fill that hole, Coach Dobell informed NPH that last year redshirt, 6’4 Jared Cornish, will be set to take the floor and will help in the paint in a diversity of ways. Cornish is a small forward who has the quickness to out-maneuver other bigs in the paint and stretch the floor, in conjunction with a solid stroke he can put to use on the perimeter. Other notable forwards that should help the cause in the key will be 6’5 Oluwafemi Ogun (6ppg) and 6’7 Kyle Wilson.

In terms of the Cougars style of play, they’ll be sure to be aggressive and influence the tempo on either side of the floor. Collectively as a team however, they will have to improve their ability to take care of the ball. Coach Dobell stressed, “We must minimize our turnovers.”

All in all, when asked about his outlook on the upcoming season, Coach Dobell commented,  “We plan to be a competitive team in our division, if we show strong play, we’ll hopefully be able to sneak into a playoff spot come March.”

The Mount Royal Cougars are a team that have recently made the move up to the CIS, but that shouldn’t necessarily give you reason to sleep on them. They’ve secured a year underneath them and have gotten their feet wet.

Obviously, they’re still a growing program, but one can’t deny that one of the hardest challenges may already be behind them, which is making the transition, from the coaching staff to the player. That one-year of experience adjusting could play a role in in a successful 2013-14 campaign.

The Mount Royal Cougars will kick-off their season on Nov 1st , as they take on the Winnipeg Wesmen in Winnipeg.