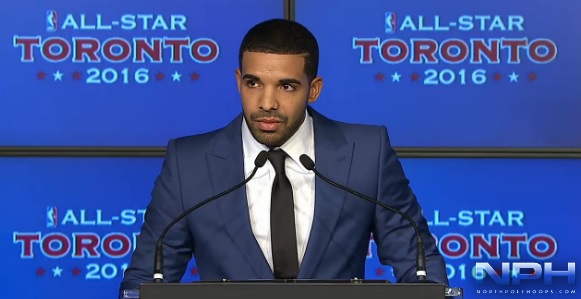 Major news broke out last week regarding NBA All-star weekend to be hosted by Toronto.

It is now official, as NBA Deputy Commisioner Adam Silver addressed a media frenzy at the Air Canada Centre, to make it so.

It will be the first time ever that the NBA all-star game will be hosted outside of America.

“This is a sport that’s going to rock the city moving forward,” he continued.

Toronto Raptors GM Masai Ujiri was also in attendance to address the media.

As for Drake, the Toronto-based global icon will promote the Raptors brand, announced as the global ambassador for the franchise and the 2016 NBA All-star festivities.

“I love the city with all my heart, I’m excited to be a part of the team,” Drake explained at the press conference. “Excited for the new vision, basketball in canada is bigger than ever before.”

“I’m out here with the people, in touch with what they want to see, I want us to be one of the biggest teams in the league,” continued Drake.

With strong player relationships around the league and Canada’s biggest star on the cusp of entering the NBA, prior to a season at Kansas, Drake said, “Andrew Wiggins is a good friend of mine, excited to see him play this year, he’s going to do phenomenal things.”

Whether Wiggins ends up in a Raptors jersey in the near future or not, Drake will now undoubtedly act as an attraction to the Raptors for NBA stars around the league.