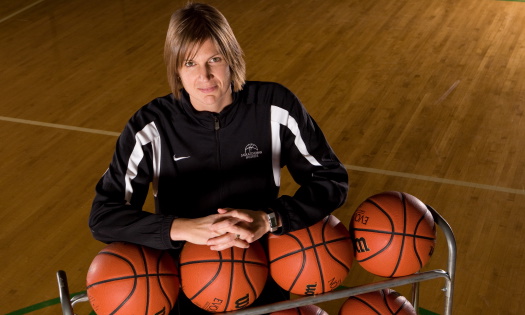 HAMILTON, ON – A new coaching staff, and a new season is kicking off for Team Canada on the International scene. After taking the reigns over from Allison McNeill, new Head Coach Lisa Thomaidis and co. are very excited, looking towards the future of Canada Basketball for women.

Over the Victoria Day long weekend, McMaster University hosted the 2013 Senior Women’s National Team tryouts, and with more than enough talent all hoping for their chance to wear the Maple Leaf.

The depth of talent is one of the many excitements that Coach Thomaidis and her staff have. Some, who aren’t familiar with the story of the women’s program would be happy to be in her position right now, as is she.

“We have a lot of younger players, and with age group development teams – Cadet, Development, Junior and Senior, there’s going to be opportunity for these women to play on one team or another,” explained Thomaidis.

“Also with it being the start of a new quad, we’re looking at keeping a bigger pool of athletes involved. It’s not as huge a problem in terms of not having enough depth, so I’m happy to be in this position.”

Hamilton, ON native Shona Thorburn has been within the Team Canada organization for seven years now, has been sidelined with a nagging injury that kept her sidelined for the first two days of tryouts. With Thorburn’s veteran leadership and experience Coach Thomaidis was optimistic on giving her the same opportunity as the other girls able to participate.

“With her experience, and the number of years she’s been involved with our program, she’s earned a lot of respect from us, and we know what she brings on the floor. Just because she is injured doesn’t mean she’s at any disadvantage, and we hope to have her back on the floor quickly. It would be great to see her matched up with some of the younger players, and as well give those players the opportunity to learn from her.”

When it comes to the success of the 2012 Women’s team, and making their appearance at the London Olympics, the coaching staff try to keep the focus on the momentum and building the women’s program moving forward.

“Our goal is to keep climbing, keep getting better and better on the international stage,” Coach Thomaidis reiterated.

The opportunity that these women are receiving is one that not many across this country have. With thousands of talented female players, Canada Basketball had to narrow the pool down to 29 invitees, definitely not an easy task.

However, now it is up to Coach Lisa Thomaidis and the rest of her staff to get that group down to 12 with on training camp left, before the team heads to Prague, Czech Republic May 28-29, for an exhibition game.

Team Canada will have a busy summer travelling the globe hitting countries such as Serbia, France, China, and Brazil with the final goal of the FIBA Americas Championship being held at the end of September in Xalapa, Mexico.

It was a great experience to see the amount of talent that the coaching staff has to choose from, and to see the talent that our country has for women’s basketball. I look forward to keeping up with the Coach Thomaidis and the team on their journey to finish in Mexico!

NPH Poll: Where Will Anthony Bennett Get ...