“Respect The Game” – #1-Ranked Carleton Ravens With Room to Grow 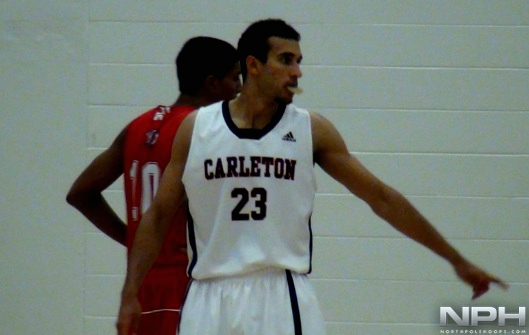 Philip Scrubb is the #1 Player in the nation with room to grow, along with the Ravens

What can I tell you that you don’t already know about the #1-Ranked Carleton Ravens?

We all know about the dominance on the Canadian University basketball scene (CIS), and the level of excellence that is expected. We know they are back-to-back national champions, who currently hold a 9-1 regular season record.

We also know that Carleton’s success is in large part due to Head Coach Dave Smart, along with the entire coaching staff, tirelessly working the bench, teaching and developing boys into men.

On Saturday night, the Ravens entered the Lions den to take on York University. Believe it or not, they left Toronto as a stronger team despite the 112-62 blow out victory.

“Today is a good step for the young guys, attitude wise…today they looked really good, but essentially they are just playing their role with confidence and aggression,” Dave Smart told NPH.

“They have been playing like they are ‘the man’ when they were in high school…but they have found their roles,” explained Smart.

The best players get the toughest love, which was evident as Smart chewed out Philip Scrubb practically the entire game. The standard has been set by the greats of the past who represented Carleton across their chest, and Smart made sure his team understood.

“I just think what we talk about every game and what our program has been about is respect,” explained Smart. “Osvaldo Jeanty, Stu Turnbull, Aaron Doornekamp, a number of guys…every day they respected the game.”

Scrubb poured in an astounding 27 points in the first half, and Carleton held a 50-28 lead entering the locker room. Despite his production, the 6’3 guard was not matching the program’s standard.

“I want Phil to overachieve like Oz overachieved. Phil has way more natural ability and there is one thing that’s hard to compete with Oz, and that’s toughness and respecting every minute he has on the court,” Smart told NPH, reffering to Osvaldo Jeanty, named CIS player of the year in 2006 & 2007.

Scrubb competes against Jeanty for five months of the year in the off season, “he knows what it’s about and I expect him to do it…he wasn’t in the third quarter,” stated Smart.

The Ravens will get every team’s best effort, and they know it. Scrubb receives the most heat, and it keeps the rest of the team in check as they work to earn minutes.

Tyson Hinz registered 13 points, seven rebounds, six assists and four steals. Clinton Springer-Williams  tallied 11 points in 15 minutes. Production came from all angles for the Ravens, yet the coaching staff is far from satisfied.

“Whether it was practice or a game, whether we were down or up, how they competed every possession, they respected the game,” said Smart, still referring to his past players. “I think this team is very talented but they don’t respect the game every day.”

And from the looks of things, the #1-Ranked Carleton Ravens have yet to maximize their potential.