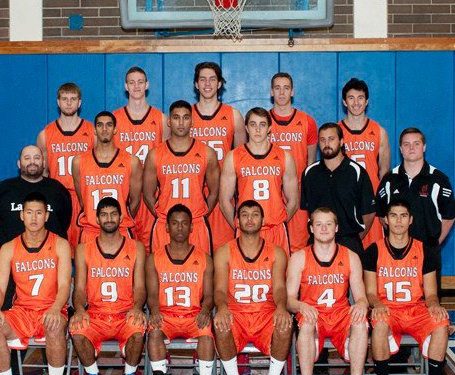 New Westminster, BC– It wasn’t pretty, but despite a number of turnovers and missed open shots, the Langara Falcons managed to hold off a second half charge by the Douglas College Royals and take a 89-78 win Friday night to remain undefeated in PacWest play.

With the win, the #2 ranked Falcons remain at the top of the PacWest conference at 6-0. The loss drops Douglas to 2-4 and into a three-way tie for fifth place.

For Douglas, third year big man Mark Dabrowski was a surprise starter. The 6’7” forward came into the game as the third leading scorer in the PacWest (19.7 points per game), but was playing through a foot injury that clearly limited his mobility. Dabrowski struggled from the field in the first half, but finished the game with 13 points, 4 rebounds, and 1 assist in 28 minutes.

Also for the Royals, second year guard Dustin Egelstad finished with a team high 19 points on 6-18 shooting and 7-9 from the free throw line. The 6’4” Egelstad played particularly well late in the game, converting on a number of hard drives to the hoop.

6’8” Harpreet Randhawa recorded a double double (10 points, 10 rebounds) for Douglas. The third year forward also showed off his ball handling skills, bringing up the ball against Langara’s full court press on a few occasions, and routinely pushing the ball up court off his own rebounds.

The Falcons had five players score in double figures, led by second year guard Elliot Mason who poured in 21 points on 8-16 shooting, including 3-5 from the three point line. Lead guard Brody Greig –who came into the game leading the PacWest at 7 assists per game –had a rare off-night, registering just three assists and five turnovers.

The strength for Langara, as it has been all season, is their depth. The Falcons dressed ten players for this game, all of whom registered at least one basket, with nine of the ten seeing at least 15 minutes of action.

Also for the Falcons, third year centre Devin McMurtry was a force on the glass, collecting 9 rebounds for the game (5 offensive), with a number of those offensive rebounds coming late in the game to help keep Langara ahead.

Although Langara came away with the victory they gave up 48 points in the second half and almost squandered a 19 point half time lead. Langara head coach Paul Eberhardt mentioned that this second-half complacency has been a disturbing trend in recent games, and given the level of talent on the team, and their goals for the season, he is holding his players to a much higher standard. Expect to see a full forty minutes of effort next time Langara takes the court.

The Falcons play their final two games prior to the inter-semester break next weekend, when they host Capilano (November 30th) and Quest (December 1st)