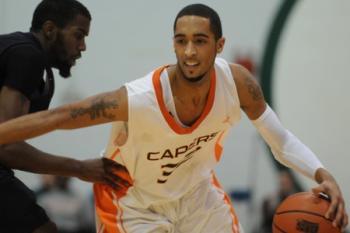 TORONTO,ON–There are many ways to explain the Cape Breton Capers’s 74-72 victory over the Ryerson Rams, but let’s try with a sequence near the end of the game.

The Capers have the ball down four, with 33.6 seconds left, when second-year forward Cedric Kasongo attempts a three-point shot. It misses, but Cape Breton wins the rebound, and fifth-year guard Jimmy Dorsey takes another three. Once again, the shot is off but Cape Breton manages to win the offensive rebound–and Dorsey, who will finish the game with a team-high 20 points, takes and now makes a three.

Down the stretch, Cape Breton made the plays it needed to make to win, while Ryerson didn’t. For the Capers, it all starts with Dorsey, the stellar senior who is coming off a season where he was named a first-team all-Canadian with a 22.8-point-per-game average that ranked fourth in the country. “I struggled with the turnovers,” he said after he had six in the game. “But when it’s the fourth quarter, it’s time to go.”

The native of Baltimore, MD, praised his teammates. “The team put its faith in me. Even though I didn’t play too well, they kept pushing me and telling me to keep going.”

Shaquille Keith, still just a rookie, explained that the Capers have visions of grandeur for their star. He said that, “Every game that we play, we’re doing it for Jimmy. We’re not worried about next year.”

Ryerson and Cape Breton are two similar teams that rely on athleticism and versatile players that are capable of playing multiple positions on the court. And on Oct. 19, 2012, at the Mattamy Athletic Centre, two teams that are evenly matched played a tight game that came down to the final seconds.

Cape Breton head coach Matt Skin said that this surely felt more than just a preseason game. “It was a great game, we have a lot of players from this area,” he said. “They were excited, intense and ready for this game.”

(Apparently, so were some of the spectators in attendance, as a mini-melee nearly broke between rival fans in the fourth quarter.)

The Capers quickly jumped to a 10-2 lead due to poor play from the Rams, but the home team responded. From there, they went back and forth. The score was tied at 37 at halftime, and Ryerson seized control after the break and led 54-46–but this time, it’s Cape Breton that responded.

If the Capers won the game, it’s in large part due to an advantage in rebounding–44 versus 21. Another downfall of Ryerson, as it seems to be every beginning of the season, was injuries. Against Cape Breton, only nine Rams players were available for head coach Roy Rana–the injury to third-year Jordon Gauthier, especially, hurts a lot right now.

Still, Skin told NPH that he looks at Ryerson as clearly a program on the rise. “Ryerson is a great team, a Final 8 team from last year, he said. “They’re at the level where we want to be.”

Dorsey mentioned that scouting only helped so much. He said that, “They’re a lot better than what they look like on tape, Jahmal (Jones) and Aaron (Best) are good leaders and good players.”

The Rams’ Greg Osawe, who missed all of last season due to injury, is rounding into form with this preseason. Though he played an efficient 30 minutes, Osawe isn’t fully healthy. “I (rehab) every day to keep my body in shape,” he said. “We could have had the game, we just didn’t do what we had to do to win it.”

Shaquille Keith, a native of Brampton, Ont., who moved to Nova Scotia for the chance to play CIS ball, has impressed Dorsey with his work ethic. “He’s a great player and has a lot to learn in the CIS,” he said. “He’s athletic, he’s active, he’s a really good teammate…Ever since he arrived at (Cape Breton), he’s been working hard and pushing everybody to get better.”

But Keith downplays it, saying that he’s just trying to be a good teammate. “I’m more mature than a normal rookie. I just try to do what I can to make my team better in any way possible,” he said. “I bring positivity at all times on the court…Because sometimes, the head loses focus on the body.”

If Dorsey led the Capers with 20 points, Keith chipped in 16 points while A.J. Geugjes poured in a double-double with 15 points and 10 rebounds. Skinn explained that the team has much room for improvement, because it has such a “high ceiling.”

For the Rams, Jones had a game-high 23 points to go along with a game-high 5 assists as he played the entire game but for one minute. Second-year player Aaron Best, third-year forward Bjorn Michaelsen and Osawe all logged in heavy minutes as well while scoring, respectively, 18, 14 and 10 points.

Both teams have a busy weekend. Cape Breton plays Brock on Saturday, and then McMaster the following day before heading back home. Meanwhile, the Rams host the first Ryerson Hoops Festival on Saturday, for which they will match up against the NCAA’s Wake Forest Demon Deacons.

Osawe can’t wait for the game. “It speaks volumes to where this program is going,” he said, “that NCAA teams are coming here in October.”

Dorsey explained that there’s nothing like an actual game of basketball. “We’re treating this like the (regular) season,” he said, “because we’ve been going at each other for the past two months and we’re tired of practice.”