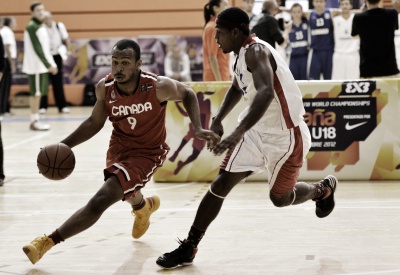 Alcobendas, Spain – Over the weekend, FIBA held its second annual FIBA 3×3 U18 World Championship in Spain. Canada sent both a men’s and a women’s team over to compete in this tournament. The Canadian U18 men had a successful run by going undefeated at a perfect 7-0 in the group stage and finishing fourth overall, while the U18 women’s team finished with a 2-3 record.

The men entered day 2 with a perfect 4-0 record and carried over the momentum they built on Friday to Saturday. They finished out group play winning their final three matches (China 20-14, New Zealand 16-15 and Poland 17-10). With a perfect record (7-0) through the group stage, Canada earned a bye into Sunday’s quarter-finals.

In the quarters, Canada faced Romania, who qualified earlier in the day by defeating Switzerland. Canada was involved in a very competitive game and pulled through with a 19-17 win to advance to the semi-finals against the USA. Canada was unable to push their winning streak to nine, as the Americans eliminated Canada from the competition with a 17-13 victory. In the bronze medal game, Canada was up against a determined French squad and lost their second straight game by a score of 19-11 to finish fourth overall in the tournament.

The Canadian U18 women’s team was composed of Shay Colley, Sam Cooper, Saicha Grant-Allen, and Kia Nurse. The women’s U18 team did not sizzle out of the gate like the men’s team. Canada dropped its first two games (Romania 8-7) and England (15-13). In the final game of the day, the Canadians were able to get into the win column after dominating Andorra, 16-4.

The women finished with a record of 2-3 and finished fourth in their group.

In the finals of the women U18 3×3 World Championship, USA defeated Spain 21-13, while Australia claimed the bronze medal after downing Italy 16-14.

Walnut Grove Has Unfinished Business at BC ...