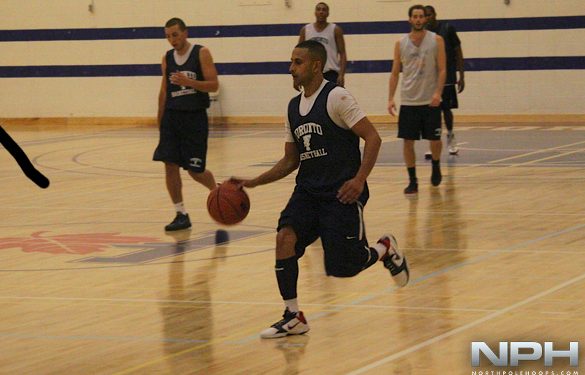 As practice wore on at the University of Toronto, head coach Rick Dilena pushed his team, reinforcing the need to play hard.

It will be a season where new faces have to step into the team spotlight after last season’s Blues graduated four key players, including three from the starting lineup.

“We’re trying to change the culture a little bit in the sense that we’re trying to get a little tougher,” said Dilena, now in his first official year as head coach after leading the team to a 10-12 record last season in the OUA.

“I think U of T’s reputation has been such that we’re a pretty good offensive team, good shooting team, we run a lot of sets. We’re still going to run sets but I think we’re going to have to play a little different because we don’t have the bigs that we’ve had in the past.”

Graduating players Andrew Wasik (an OUA-east second team all-star) and Drazen Glasic each averaged 6.5 rebounds per game last season, while Sean Nickel came off the bench to average 3.5 rebounds – third most on the team.

When you factor in the 1.9 rebounds of the fourth graduate Justin Holmes, the Blues lost 18.4 rebounds per game, more than half of the 35.3 they averaged as a team.

“The past couple of years we threw it in to Wasik and Dre [Glasic] on the inside because they were the all-stars and really good players,” said Blues leading scorer Alex Hill.

“This year we have some decent posts but we’re a little undersized so the guards have to pick up some of the slack.”

Hill, a 6’5 forward who played his high school ball at Eastern Commerce, averaged 16 points per game, and made it to the free-throw line often, sinking 4.5 per game at 86.7 per cent clip.

“We’re looking okay,” added Hill. “We’re working hard, we’re a little bit short, but I think we can make up for that by just playing our hardest and to do that we need to practice our hardest.”

While at Eastern Commerce, Hill says he played with seven guys that went on to play Division I basketball in the United States so every practice was a test against some of the best in the city, each jostling for position on the team and adjusting their effort accordingly.

Hill hopes to bring that effort to Blues practices and show the new recruits what it takes to succeed. He and fifth-year player Arun Kumar will be the keys to the season and will have to lead both vocally and physically for the team to succeed, said Dilena.

“Last year I was playing point guard primarily and naturally I’m more of a shooter. This year they’ve shifted me over to the two-guard spot so I think I’ll flourish better in that role,” said Kumar, a 6-0 guard from Hamilton.

“I have to be a leader for these young guys, we’ve got a young team and I’ve got to do my best, just like the older guys helped me when I was younger so I have to help these younger guys mature as players and as people.”

Through the pre-season, the team will have a chance to “work out some of the jitters” as Kumar calls them, and determine where they can improve and how they’re coming together as a team.

Unfortunately, as legendary Boston Celtics coach Red Auerbach used to say, ‘you can’t teach height,’ and the Blues will have to compensate with strong perimeter play this season to remain competitive.

“There’s a lot of good things but we’re very undersized, and we’re going to play a little differently so that’s going to take us a while for us to find our way, so, I’m being honest with you, I don’t know, I don’t know what to expect,” explained Dilena.