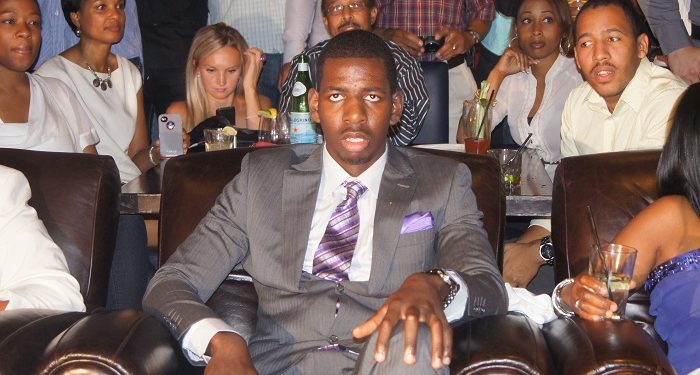 TORONTO,ON–As I pointed my camera to the direction of St Bonaventure’s 6’9 forward, Commissioner David Stern was on the verge of announcing the 16th first round pick of the 2012 NBA draft.

However, as Stern resumed, it was not Andrew Nicholson’s name that was called…not just yet. Nicholson’s agent passed along the message, “He should go between 16-23.”

On this cue, family and friends hovered around the Bonnies’ star as he sat on the couch  staring at the screen.

You could sense the anxiety and read it off Nicholson’s face as he, along with the rest of the room waited impatiently for the moment.

Two more names were called before, “The Orlando Magic select Andrew Nicholson” with the 19th overall pick in the NBA draft.

Nicholson popped off his seat like a jack in the box while providing a preview of his leaping ability, as the entire room erupted in joy, tears and chanting. A dream turned into a reality right before our eyes, after witnessing the Mississauga, Ontario product gradually earn respect at the NCAA level despite a lack of national recognition.

Nicholson worked out for over 10 teams leading up to the draft, where he impressed each time, increasing his stock in the process. He becomes the third Canadian first round draft pick in the last two years, following Tristan Thompson and Cory Joseph, who entered the league during the 2011 NBA draft.

However, Nicholson was not the only Canadian expected to hear his name called as Kris Joseph (Montreal, Quebec) and Robert Sacre (North Vancouver, British Columbia) were projected as second-round picks.

As the end of the second and final round neared, Joseph was selected by the Boston Celtics with the 51st pick in the 2012 NBA Draft. Joseph was the leading scorer for the powerhouse Syracuse Orange, averaging 13.4 points per game this past season along with 4.7 rebounds, 1.5 assists and 1.4 steals.

Last but not least, the vibrant seven-footer, Rob Sacre out of Gonzaga was selected with the final pick (60th) of the draft, heading to Hollywood to join the Los Angeles Lakers.

“I would love to help Kobe get another ring and help make him the greatest ever,” Sacre told The Province.

Sacre was the heart and soul for the Gonzaga Bulldogs, who provided his team with energy and toughness while registering 11.7 points per game, 6.3 rebounds and 1,3 blocks in his senior year.

With three Canadian selections in the 2012 NBA draft, history has been made once again in the Lottery Era, increasing the amount by one from last year. Expect this trend of Canadian NBA players to continue moving forward with potential prospects on the horizon such as Myck Kabongo, Kevin Pangos, Anthony Bennett, Khem Birch, and Justin Edwards to name a few.