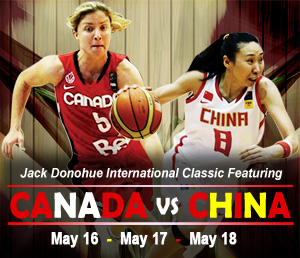 TORONTO – Canada Basketball is pleased to announce the schedule for the 2012 Senior Women’s National Team. The team has a busy summer ahead, as they strive to reach their goal of competing in the 2012 London Summer Games.

Phase 1 marks the beginning of preparation for the Olympics. The schedule starts with the Tryout by Invitation and Training from May 3 – 15 at the University of the Fraser Valley in Abbotsford, BC. It will then conclude with the 2012 Jack Donohue International Classic, consisting of three exhibition games against the Chinese Olympic Team.

After Phase 1 is completed, Phase 2 of the schedule will commence. The team will regroup and practice in Toronto June 2 – 4 before travelling to Europe. Prior to arriving in Turkey for the FIBA Olympic Qualifying Tournament for Women, the Canadian Senior Women’s National Team will play in a set of exhibitions games.

The FIBA World Olympic Qualifier for Women will decide which teams will qualify for the 2012 London Summer Games. 12 teams participate in this last tournament, with the top 5 finishing teams earning a berth into the Olympics. Canada has been placed in Group ‘D’ that features France (ranked 8th) and Mali (ranked 19th).

The competition schedule for women’s basketball in the Olympics starts July 28 and ends August 11.