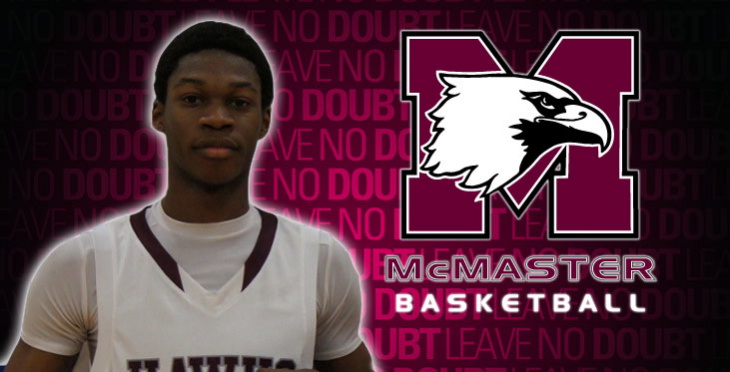 HAMILTON,ON–On the heels of a tremendously exciting and successful season, McMaster men’s basketball coach Amos Connolly has added another piece to what he expects will be a national contending team next year.

NPH #22-ranked Rohan Boney from Oakville`s Loyola high school has confirmed he will be attending McMaster and joining the Marauder hoops squad.

One of the most highly regarded prospects from this year’s class of Ontario high school graduates, Boney decided to become a Marauder after weighing recruiting interest from schools on both sides of the border.

“Rohan immediately changes the look of our team. With his athleticism, we now have a player who can score and create in a variety of ways that compliments the strong outside shooting of our current guards,” exclaimed Coach Connolly.

“Rohan can also defend a number of positions and he’ll immediately be called upon to become a defensive stopper. His combination of size and quickness will allow us to extend our pressure when needed.  This is very exciting because our team just got better.”

Along with achieving tremendous team results that included three Halton region championships and two OFSAA silver medals for his Loyola Hawks, Boney has garnered numerous individual accolades, including being named the Most Valuable Player of the prestigious Silver Fox basketball tournament in 2012.

The versatile Boney explains he is looking forward to playing with the talented young roster at McMaster, “The Marauder program is headed in the right direction and I feel like I can be a big part of what Coach Connolly is putting together.”

His commitment to the Marauders means Boney will be re-united with his former Loyola high school teammate Adam Presutti, who was recently honoured as the 2012 CIS Rookie of the Year.