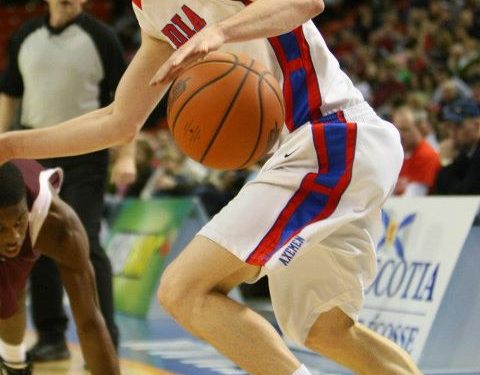 Halifax, NS–With St. Francis Xavier already through to the championship, the X-Men awaited their opponent.  For the fifth time this season, the Acadia Axemen and the Saint Mary’s Huskies faced off, however this game had the most at stake; a chance to play another game, a chance to compete for an AUS Championships and an automatic bid to the CIS Final 8 championships next week.

The Start of this game had the fans on their seats as both teams came prepared to play.

Brian Rouse for the Huskies came out firing and had success driving hard to the basket.  However, following the fast paced start, both teams hit a wall offensively.  The score after the first quarter was 14-11 in favour of Acadia.

As soon as the second quarter commenced, Miguel Pink hit a three pointer to tie the game up. The teams were then forced to stop as the floor boards at the Metro Centre had come loose.  This caused a huge delay in the game forcing both teams to sit for extended periods of time.

Following the restart of the game, both teams finally started to wake up offensively.

Anthony Sears of Acadia had 14 points going into the halftime break, whereas Brian Rouse of SMU had 11 points.  Both teams were in a dog-fight as Acadia held a slim 38-37 lead at halftime.

The intense battle continued its way into the third quarter as neither team would give up anything. Saint Mary’s Harry Ezenibe went down at the beginning of the third quarter and was unable to come back into the game.  With an already short SMU lineup the Huskies battled hard.

Things didn’t get any easier for the Huskies as coach Quackenbush received a technical foul and Tory Fassett picked up his fourth foul.

Saint Mary’s would not be counted out as they battle through a tough third quarter matching Acadia and was led by Rouse continuing his strong play.

Riley Halpin decided to get in on the Huskies attack and really played hard, portraying his emotions every time he made a play.

Rouse hit a three pointer right as the third quarter expired cutting the Acadia lead to only one with one quarter left to play. While the Huskies were having success with a smaller bench, the Axemen were able to keep it close.

The final quarter produced great drama as both teams felt they could take this game.  The Axemen took an early blow to their chances as Owen Klassen picked up his fourth foul in the first seconds of the fourth quarter.

Miguel Pink then started to get hot and connected from behind the arc three times in the quarter.

With that momentum from Pink, Saint Mary’s took  control of the game and a five point lead late in the game.

Acadia responded with a huge three pointer from Anthony Ashe which cut the lead to two.  Big man Owen Klassen fouled out as well as Saint Mary’s Tory Fassett.

Acadia then decided to start shooting the three.  On back to back to back possessions, the Axemen converted on their three pointers.  First it was Anthony Ashe, then Brad States, and Jonathan Tull connected.

Acadia closed out the game with a 96-87 victory.

Stephen Baur, head coach for Acadia talked to NPH in the post-game.

“It was a pace I wasn’t enjoying there for a little bit but we got it to where we wanted it and I think our guys finally buckled down in the last few minutes defensively and made a difference.”

Anthony Sears had a huge game for the Axemen finishing with 31 points, 10 of those points coming in the final quarter.

NPH also caught up with Sears after the game.

“We battled through a lot of adversity down the stretch with Owen fouling out and being down by five points with just under three minutes to go. We just believed in each other and a lot of our guys stepped up and played well for us.”

With the victory, the Acadia Axemen move on to face St. FX in the AUS Championship game and will also be heading to the CIS Final 8.

On the other side of the game, with the loss, Ross Quackenbush will end his career as the head coach at Saint Mary’s. Quackenbush has been the coach of the Huskies for 23 seasons with this one being his last. Good luck to him on his future endeavours!