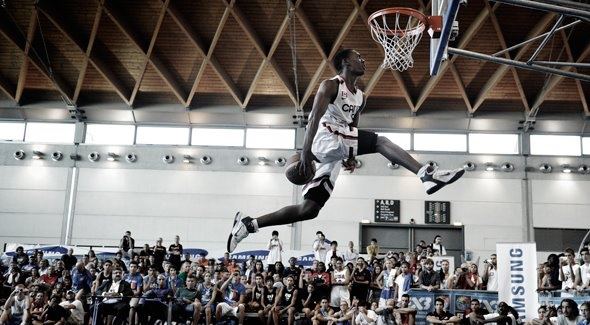 The Raiders controlled the tempo and were able to neutralize the talented Harvard University commit Agunwa Okolie holding him to a quiet six points at the half.

Dyshawn Pierre exhibited his improved court vision getting all his teammates involved with five first half assists to go along with his 12 points.

Dennis O’Connor made a strong push in the middle of the third quarter as they went on a 6-0  run led by their star performer Okolie reducing the Raiders lead to 53-46.

Clutch three point shooting by Jake Hutchcroft finally put an end to the comeback hopes of the Chargers, and the Raiders cursed to their third straight LOSSA championship.

”It was a good game,” Pierre told NPH after the game. “ I was ready, we were ready. There was a couple times where we let the game get back in their hands, but I think we responded well.”

Pierre who is on the tail end of a terrific high school career at Anderson completed the sweep of LOSSA having never lost a LOSSA final game, making it five gold medals for his trophy case.

“It great winning all five championships in a row,” explained Pierre. “Obviously playing with Justin (Edwards) made things a little bit easier before, but our fifth year players really stepped up. We were able to do what we needed to do to win.”

The Raiders will now set their sights on defending their OFSAA championship without Maine University freshman and former Anderson Raider Justin Edwards.

“We played Martingrove in the Humber tournament and lost pretty badly, by close to 25 points. We’re keeping an eye on them. They’re a really good team, so we’ll be working hard every day in practice to try and get ready for them,” said Pierre about defending the OFSAA title.

Games played at CCH on Monday and all games on Tuesday and Wednesday will be webcasted. All results will be updated on the website and through Twitter as it happens. Stay tuned to NPH for complete coverage!

Fraser Valley Cascades Primed For The Next ...