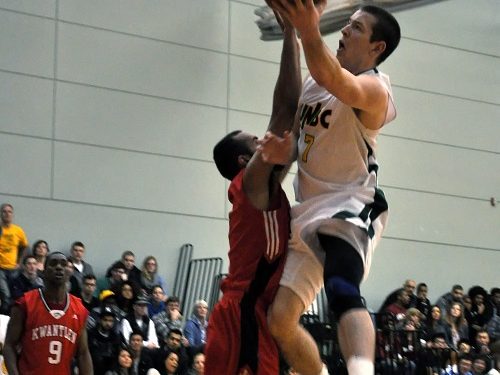 VANCOUVER,BC–One team, a perennial provincial power, entered the year’s final regular season game with a daunting 12-3 record. They had won a double-overtime game the night before, cementing their second-place spot in the standings and securing an automatic bye for the first round of the approaching playoffs.

The other, a team who won just one league game the previous year, entered the match having won four of their last five. They had two options: win the game in upsetting fashion and clinch the league’s sixth and final playoff spot, or lose, and end their season prematurely.

In a convincing 92-72 victory, the University of Northern British Columbia Timberwolves reaffirmed their confidence heading into the postseason, while the Kwantlen Polytechnic University Eagles were forced to exercise the undesirable second option.

“They we’re scrappy tonight,” said UNBC head coach Todd Jordan, understanding that it was a must-win situation for Kwantlen. “I talked to the guys about that before the game actually because we knew coming in that they were going to be scrappy.”

After scoring seven-unanswered points to start the game, UNBC weathered a few Eagles mini-comebacks to lead this one start to finish.

Following the seven-point burst, third-year Eagles forward Varinder Singh nailed two of his trademark 30 footers to bring back the love of a raucous crowd that resulted in one fan’s ejection due to his vocal criticism of the refs.

The Timberwolves began the second quarter with a 24-15 lead and extended it to 30-17 after back-to-back threes from fourth-year sniper Francis Rowe. However Kwantlen, not giving up on their playoff hopes, answered with back-to-back bombs of their own courtesy of Peter Mitchell and Anmoel Dhillon. Those buckets anchored a 9-3 Eagles run to end the first half, keeping UNBC’s lead within striking distance at 45-35.

Kwantlen continued their attack in the third and cut the Timberwolves lead to just five, 54-49, midway through the frame. Jordan was visibly frustrated and called a timeout amid the roar of Eagles fans.

“We just got out of control a couple of times,” he said. “It was more just to calm them down and get them under control.”

The Timberwolves may have gotten under control but the scoring started to get out of it. Jordan’s goal seemed to work, as his squad came out of the crucial timeout and posted a 15-4 scoring spree to end the quarter.

In the fourth, Kwantlen tried to launch three-point bombs in order to claw their way within single digits, but missed a lot more than they made, going 2-14 from deep during the second half.

As UNBC began to run away with a W, they did their best to do so with an exclamation point.

Fifth-year forward Dennis Stark, who was a finalist in the 2007 B.C. AAA dunk contest, tried to cram a vicious baseline tomahawk, but took off a little too far from the hoop and the stiff iron rim gave him no sympathy.

The very next play, Stark attempted to finish a lob off the backboard from Rowe, but was whistled for an offensive foul as he bowled over a defender to get a chance at the alley.

Then, in the defining play of the game, third-year guard Charles Barton executed a massive two-handed putback that completely sucked whatever life was left in Kwantlen’s gym.

“I thought that once we made that run back at them, after the timeout in the third quarter, that they kind of got a little deflated, and then the game was put away at that point,” said Jordan. “Up until that point they definitely scrapped and fought. We got up a couple of times and they battled back and didn’t stop working. They definitely played like a team with some desperation tonight.”

Barton was the leading scorer for UNBC, finishing with 19 points and 10 rebounds, while Stark pumped in 14 and 11 in a game that saw five Timberwolves reach double-digits.

Singh led Kwantlen with 17 points and 11 rebounds on three of five shooting from beyond the arc. Third-year forward Ali Bosir added 18 and 8, and the Eagles starting point guard Chris Arcangel chipped in with 13 points and nine assists.

“We needed to make more shots,” said Eagles head coach Stefon Wilson. “I mean in the first half we missed seven layups. Once again, when you’re playing a very good team, you gotta make those. It was the same thing against Langara, we missed too many free throws, we missed too many layups.

The results of this one are on completely opposite spectrums for each squad. UNBC will now prepare for playoffs, heavily favourited alongside Vancouver Island University – a team they’ve met in the provincial finals for two straight years.

“We’re going to go in [ranked] one and two and I think there’s a good possibility of us seeing them again. We’re definitely going to be thinking about them in the next couple of weeks when we do our preparations for the teams we might see in playoffs.”

On the other side, Kwantlen will reflect on an up-and-down season that could be a turning point for the program.

“I’m very excited about the future here, I really am,” said Wilson after the game. “Hopefully we won’t lose anybody and we can come back and add a couple pieces. And now what Kwantlen basketball… I think that foundation’s in place, and I think we’ll be fine.”
PacWest playoffs tip off Thursday, March 1 at Capilano University’s Sportsplex.